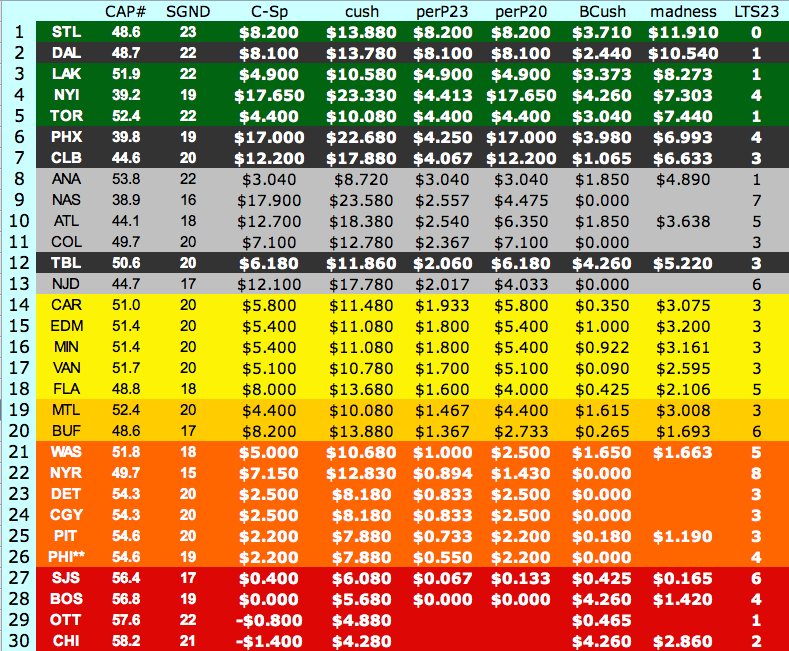 cush = the off-season cushion (teams are allowed to go over 10% but they must be down to the cap by the time the season starts — or maybe it’s the day before; ask Brian Burke).

perP23 = cap space per player remaining to be signed, to populate a 23-man roster.

madness = cap space per player remaining to be signed, to populate a 22-man roster, while recklessly eating up your bonus cushion.

Exciting new black coloration: highlights teams that are working under a self-imposed cash-cap (CBJ) or are otherwise financially hobbled (the others). They have the cap space but (likely) not the will or the cash to help out the folks in the orange or red zones by taking on their salary dumps.

Some comments on this week's list: almost all of the movement is from the teams with cap space (shockingly). The bottom half of the list is more or less stagnant. The Kings have slightly more cap space per signing left than they did before, due to the lower-than-expected (by me) cap hit for Jack Johnson. Incidentally, since Purcell is supposed to be signed on Monday, I took the liberty of adding him in; my guess as to his cap hit: $900K. We'll see if I'm right. I'm usually not.