Share All sharing options for: From The Puck Stops Here: Worst 20 Corsi Rates

Today, I am listing the worst 20 adjusted Corsi rates. The adjustment method involves calculating a player’s Corsi rate while he is on and off the ice and subtracting them to get the adjusted rate attributed to a given player. This is similar to the adjustment that behind the netdoes with on/off ice adjusted +/- ratings.

Here are the 20 worst adjusted Corsi rates from 2008/09 among players with 50 or more games played: 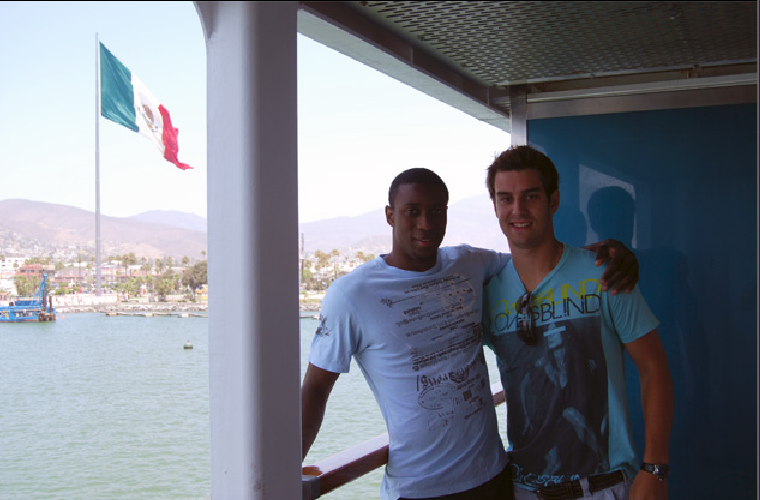 [oops, sorry. Kings-Kool-Aid Editorial interruption. That's obviously not PuckStopsHere's chart. It's Purcell and Simmonds on the recent Kings Fan cruise. I wanted to do a post on the cruise but never got around to it, though I grabbed the picture from the Kings site. Okay, here's PSH's chart of the worst Corsi numbers:] 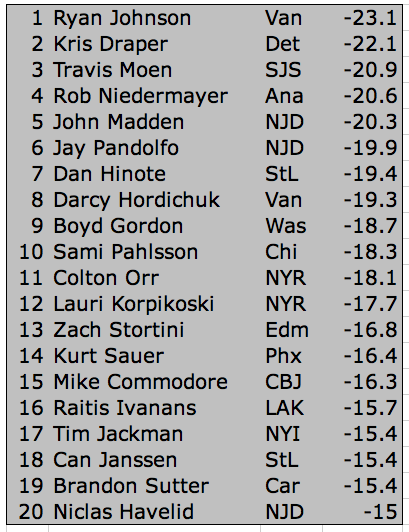 This list appears over-represented by shut down forwards who struggled last season (such as Kris Draper and John Madden). This is in contrast to the counting stat adjustment which is over-populated by shut down defensemen. Neither push puck possession on their teams, but since defencemen tend to get more ice time they tend to lead in a counting stat format, while the forwards have worse overall rates. Nine players appear on both worst Corsi lists after adjustment. They are Kris Draper, Rob Niedermayer, John Madden, Jay Pandolfo, Boyd Gordon, Colton Orr, Lauri Korpikoski, Kurt Sauer, Mike Commodore and Tim Jackman. Three players on this adjustment list are not eligible for the counting stat adjustment since it requires players to play on only one team during the season and they were traded (Travis Moen, Sami Pahlsson and Niclas Havelid). The other players who appear on this list are players who had limited roles on their respective teams (to not get enough ice time to appear on the counting stat list) and failed. Ryan Johnson of the Vancouver Canucks leads this group. He probably played himself out of the NHL last season.

This list is by no means a list of the worst twenty players in the NHL. Many of the shutdown forwards, though they did not have good seasons, are made to look worse because of high calibre opposition. Any player appearing on this list who did not play against top opposition last season did not belong in the NHL. Many of the players in that group will soon find themselves without NHL jobs.

I don't know why I'm feeling so down on Ivanans lately. I was a luke-warm supporter of his most of last season. Maybe it was that league-topping obstruction penalty stat (among the worst, not THE worst -- he might have been THE worst, but I'm too lazy to work it out -- whatever the number was, it was ugly). Or maybe it's just the fact that the roster spot he's squatting on I would rather be filled by Purcell, Moller, Lewis, etc. etc. and I don't want to see someone I like get sent down because we need 6 minutes of knuckle-dragging every game. And yes I know he works hard in practice. Maybe he also has a pet mouse he keeps in his pocket, which, one day, in a foreshadowing of what is to come, he will accidentally crush to death in his palm.