From the Kings site: Clune/Harrold/Westgarth (related: Clune is an EXTREME agitator)

Share All sharing options for: From the Kings site: Clune/Harrold/Westgarth (related: Clune is an EXTREME agitator) 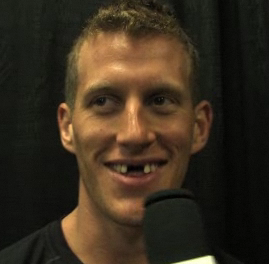 Rich Clune, Peter Harrold and Kevin Westgarth could see playing time on the Kings fourth line this season. Harrold a center/seventh defenseman hybrid, played in 69 games last season at both positions scoring 4-8=12. Westgarth made his NHL debut a year ago and skated in nine games, posting nine PIMs, while adding 165 PIMs in 65 games at Manchester. He is challenging for time on the roster as the Kings enforcer. Clune is an interesting prospect, an extreme agitator on the ice, he returned from injury to collect 87 PIMs in just 35 games with Manchester last season.