Landed In The Hockey News!

Share All sharing options for: Landed In The Hockey News!

The current September 7th issue of The Hockey News has a preview of all 30 teams in the NHL written by Adam Proteau that includes a short statement by bloggers of each team. I was asked to write about how the Kings will fare for this new season and I graciously accepted. My only restriction was to keep it under 50 words, which was a bit stifling but I managed to power out something I hope all Kings fans can stand behind. 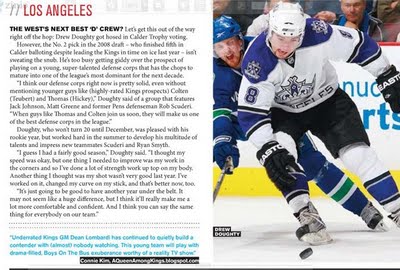 Here is a screen shot of the digital issue. I'm located on the top half of page 33 next to a great picture of Drew Doughty. Just in case you can't read it, it says:

Underrated Kings GM Dean Lombardi has continued to quietly build a contender with (almost) nobody watching. This young team will play with drama-filled, Boys on the Bus exuberance worthy of a reality TV show.


A few words were snipped out of what I wrote, but it doesn't affect the overall message, which is that this team will make other markets aware of its presence by continuing on the path set out by Lombardi years prior. For Kings fans, there shouldn't be any surprises in the team's potential output considering the additions and subtractions made this summer.

Thanks to Earl Sleek for the mention as he was chosen to write on the Anaheim Ducks. Congrats to fellow HLOGers Elise from 18,568 Reasons Why... and Bethany from Bethany's Hockey Rants. And congrats to all the other bloggers who were asked for thoughts on their respective teams.