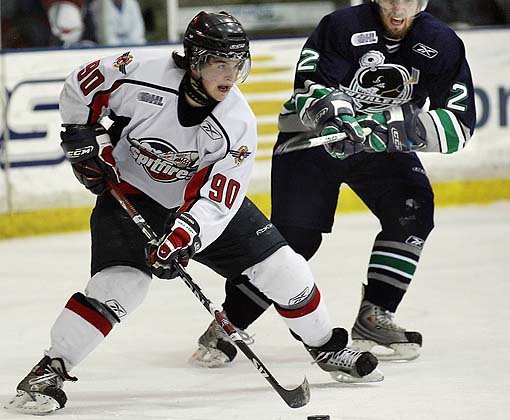 Andrei Loktionov, a 19-year-old Russian making his professional hockey debut, scored three goals and had an assist to mask an invisible second period by the Monarchs, who gave away a 3-1 lead.

"He's a beautiful skater," Manchester coach Mark Morris said. "When you watch him skate, it's almost like he's on a cushion of air. It's effortless. We're grateful we have him right now. I don't know how long that will be, but we're going to enjoy him while we have him."

After Manchester had surged ahead 4-3, Loktionov -- who was a plus-4 on the night -- completed his hat trick on a play any NHL player would savor. He took a cross-ice pass from Scott Parse and in one motion slapped the puck behind a bewildered Justin Peters in the Albany goal.

I just love that part I put in bold. It warms my grinchy heart after that steaming pile of s**t they served up at Staples tonight.