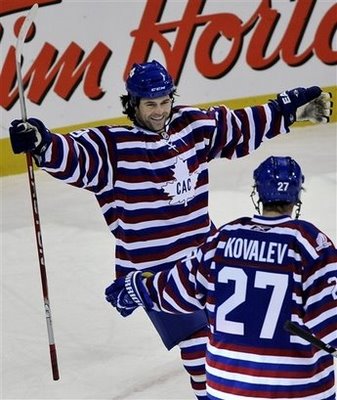 Since leaving the Red Wings after the 2006-07 season, Robert Lang has made a home in Chicago and Montreal. Now he’s a six-hour drive from his off-season home in San Diego, centering the top line for Phoenix between Shane Doan and Taylor Pyatt and helping the Coyotes to a surprising 5-2 start.

Lang, who signed a one-year deal worth $1 million to come to Phoenix, said all the off-ice distraction about the Coyotes (their financial state, the Wayne Gretzky saga, etc) isn’t worth worrying about because "you can’t really solve it. There is literally nothing you can change by you doing something. If you win, obviously the chances are better that the team is going to be successful, but even then, there are no guarantees."

I asked Lang if he’d kept in touch with Jiri Hudler (Lang used to refer to Hudler as his "fifth kid" during their days in Detroit). "No," Lang said, laughing.. "I didn’t talk to Huds since he left. I’m kind of wondering sometimes how he’s doing, but I’m sure he’s fine."

Lang is just as certain the Wings – who have just seven points after seven games – will soon be back in the mix of things as usual.

"They are a good team," he said. "They are going to get their points. I’m not worried about Detroit, nobody is, I don’t think. We are playing well right now. They are playing well always, so it should be a good game. It’s always fun to play those games. I’m looking forward to it."