Share All sharing options for: Saved In Overtime: Kings 5, Stars 4

Last night the Dallas Stars stepped into Staples Center for the first time this season and I was pretty confident the Los Angeles Kings were going to finish the game with the W. All signs pointed to the victory but having to get the win in overtime rendered me speechless. I'm actually unsure of what to say about this game, but I'll try to get something out.

If games were only 40 minutes long, I'd say with 100% confidence that the Kings played their best hockey. Alas, they are 60-minute contests and, for this game, the Kings played their usual up and down, inconsistent hockey. The modified lines looked decent and actually performed wonderfully... but only for 40 minutes. It's a bit difficult to compliment the team on how they made the Stars looks like fools when they themselves didn't hold on to their level of play. This is definitely a bittersweet reflection.

The good: Anze Kopitar owning this game... well, the first two periods of the game by getting his first career hat trick. He is turning into the player management knew he could and has definitely been earning his paycheck. He completely controlled the game as he scored like a madman. As of today, he's tied with a certain Alexander Ovechkin of the Washington Capitals in points (8G, 8A and 9G, 7A, respectively). 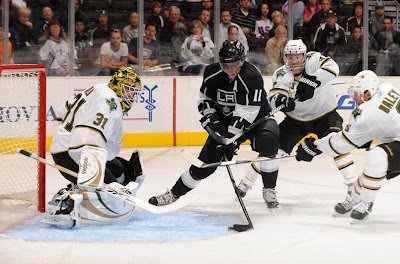 The Kings were looking fantastic going into the third period, but their hopes were fading as they watched the Stars tie up the game 4-4 forcing the game into OT. Heart breaker. I hardly have the stomach to comment on the third period, but I was happy when Michal Handzus killed the Stars just 55 seconds into OT. His slapshot blasted past Alex Auld and the game was done. I'm very happy that overtime ended in the Kings' favor but the two points don't make up for the poor third period performance. I honestly wondered why Terry Murray pulled Quick at the end of the second period with just 2.7 seconds left in the game when they were up 4-1, but I definitely understood the reasoning 20 minutes later.

The Bad: First off, one thing I can't understand is why Brad Richardson is on the ice during important times in the games. Last night, he was on the ice with just a few minutes in regulation, which is exactly the opposite of what I'd expect! Secondly, Jonathan Quick letting in the goals he did; I'm just in a little bit of shock.

The Needs to Improve: Teddy Purcell received 12:31 of ice time and ended at a minus 1. I'm sure the improvement will explode sometime this season, so I'll continue to wait. To address Alexander Frolov; his play was fine. I honestly didn't think he was any better or worse than before he was benched. I have zero words of wisdom for these two players. Just... focus?