4 In a Row via Kopitar: Kings Over Coyotes and Blue Jackets

Share All sharing options for: 4 In a Row via Kopitar: Kings Over Coyotes and Blue Jackets

This weekend saw the Los Angeles Kings on their second back-to-back in this young season and I can't decide who has been the star of these past two games; wait, I can, but Jarret Stoll needs props. Stoll has scored his 3 goals in the last two games and has been effective in the faceoff circle and on the forecheck. On the other hand, Anze Kopitar now leads the league in both goals and points, 10 and 21, respectively. Obviously Kopitar is the player of the weekend, week, and month! He's been an absolute stud for the Kings and I couldn't be happier.

Last night the Kings faced the Columbus Blue Jackets for the second time this season where they fared quite a bit better winning 6-2. The story of the game was Jason Chimera getting up ended by Rob Scuderi. Scuderi went to deliver what looked like was going to be a hip check but ended up actually clipping Chimera right in the knees. It was definitely low but it wasn't an intentionally dirty hit. Unfortunately, Chimera looked like he got his head throttled back as he flipped over, but I honestly can say Scuderi wasn't intending for that to happen, which I'm sure is something we all can agree on. Many people will have an opinion, so have at it. Or not.

By the way, the punch to the back of Alexander Frolov's head was REALLY not needed. You can be frustrated, Chimera, but let's leave the punching off the ice. Speaking of Frolov, this weekend he notched two goals and two assists, and I can only hope that he has officially been let out of the doghouse with his production. You really couldn't have asked for more from Frolov in last night's game; perhaps he could have stayed on his feet more against Phoenix, but Fro isn't perfect so I can't hate. 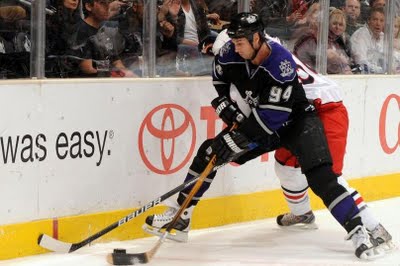 Ryan Smyth continues to be his beastly self logging big ice time and making sure his presence is felt by the opposition. He was on the Fan590 on Friday and was asked about the upcoming Olympics. I don't think anyone is surprised that he was honored by the invite and would love to be a part of Team Canada. 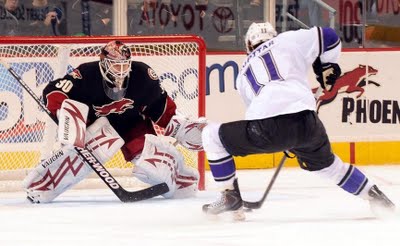 The difference between this game and Saturday's game against the Phoenix Coyotes is that the Kings beat the Jackets handedly while they were on the verge of another collapse against the Coyotes. This was a 5-3 win for the Kings but, let's be honest, it could have resulted in another OT stint or just a straight up loss. Instead the Kings readjusted themselves and finished the game with two more points.

Dustin Brown and Jarret Stoll were the highlights of this game. Brownie had over 21 minutes of TOI and had two goals. One was an empty netter, which neither the team nor he really needed. It appeared that he was just skating toward the Coyotes' empty net with no real intention to finish the game off with a pompous gesture. I'm not even sure the puck slid past the goal line before time ran out, but I would have still been happy if it wasn't counted. Stoll had two goals, 18 minutes of TOI, and a respectable 50% win in the faceoff circle. 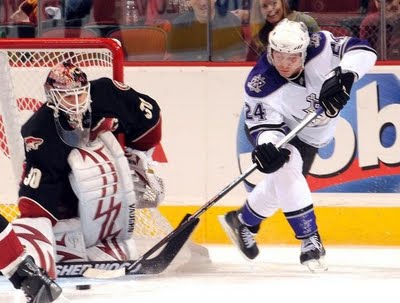 Some more tidbits to chew on: