The Los Angeles Kings redeemed themselves last night against the San Jose Sharks with a 6-4 victory. I was extremely proud of their efforts in the first period but was soon shell-shocked in the second and third when the Sharks came back to score 4 unanswered goals. Before puck drop I was still wondering about the defensive pairings that seemingly paired like-and-like instead of one offensive-minded with one defensive-minded, but anything could have been better than last Saturday so I wasn't too worried. I soon was swallowing any doubts because the Kings showed up and played a hell of... well first period and second half of the third period. This game was no where near what the Kings would like on a per-game basis.

In looking at the positives of the game first, I'm not sure which of the Kings 6 goals was the best but I will say that Jack Johnson's aggressiveness and willingness to get to the net can only lead to great things. As long as he has the defensive support on the back end, I can only encourage his spark to get his stick on the puck. Michal Handzus' pass to the front of the net couldn't have been better timed during the 4-on-4 play. Another positive was Anze Kopitar's goal in that he should be scoring like that every single game. His was just about the nastiest and sickest goal I've seen from a King in awhile and Evgeni Nabokov never saw it coming. 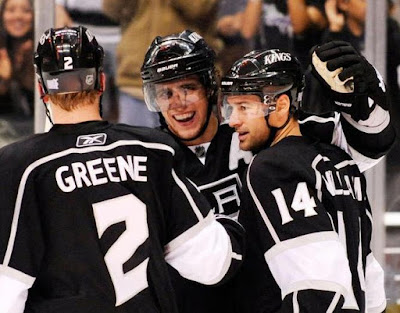 My mantra of the Kings being "consistently inconsistent" continued last night by their sheer meltdown in the middle of the game. Yes, their passing and transitions were impressive, but the inevitable excitement and inability to immediately calm the nerves after their lead was built lead to the Kings suffering 4 unanswered power play goals from the Sharks. The most blatant penalty was the Too Many Men call while they were on the power play. The Kings were all over the place during their penalty kills and the bloom was quickly off the rose as the Sharks tied the game with less than five minutes in the game. Yet hope was renewed by Teddy Purcell, the player under arguably the most scrutiny, and his "hail mary" shot from a ridiculous angle. [Update]: Thomas Greiss Nabokov didn't have any control over it whatsoever and the Kings were back within getting the well-deserved two points.

I was very impressed with the 3rd line of Alexander Frolov, Handzus, and Wayne Simmonds. These guys were playing against the Sharks' better players while generating offense at the same time. Their chemistry last night proved that this could potentially happen every single game, which makes this line more of a threat than the 2nd line of Purcell, Jarret Stoll, and Dustin Brown.

According to the stats sheet, Frolov was on the ice for only 17:29 but he utilized every single second by producing 2 points while also being double shifted on the 4th line, which disappeared pretty quickly. Raitis Ivanans did his duty playing less than 5 minutes but letting the opposition know what he really thinks about them. Here's Raitis landing some dome shots on Jody Shelley after Davis Drewiske was slammed into the boards. Thanks, Ivanans for sticking up for the rookie! 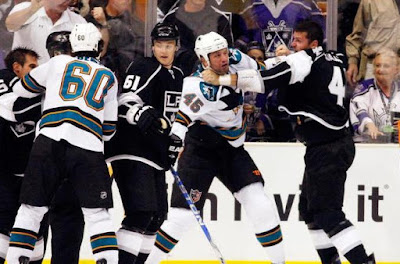 All of the Kings were nicely either even in the +/- column or on the plus side while it was just the opposite on the Sharks end. Interestingly, Dany Heatley collected three points and was a -2, Devin Setoguchi got 2 points and ended at a -2, and Joe Thornton got three assists and had almost a team-worst -3.

Lastly, props to Drewiske for scoring his first NHL goal. Yes, it was on an empty net, but it was with full traffic between him and the goal mouth and it put the game away for the Kings.