Starting The Road Trip Off on a Great Foot!

Share All sharing options for: Starting The Road Trip Off on a Great Foot!

The Kings are off to a solid start to the season going 4 and 1. I found their game on Saturday against the St. Louis Blues to be a solidly won game while the win this morning against the New York Islanders was less cohesive but still satisfactory. On Saturday the Kings played a great game all around. The passing was clean, the transitions were smooth, and the lines were clicking nicely. They won 2-1 with the Blues giving it an exciting ending to the cap off the night.

Every game brings me closer to saying, "I'm cool with Ryan Smyth." I can't deny he does what the Kings have needed for a long time, get a body in front of the freaking net, and I can comfortably say I like Smyth better than Justin Williams. I feel like I'm never going to be sold on him; what's the deal? Someone please have a discussion with me! I give a definite two thumbs up to this win with the only time the Kings faltering in their play was the incident that led to Alexander Steen's goal, which was in and out of the net so quickly that play was not halted immediately. The defense looked great and Jonathan Quick was solid.

The score was also 2-1 for today's game on the Island, but the noted difference was that both teams were allowing the play to move back and forth through both zones instead of one team asserting themselves over the other. The Kings didn't control the game until Anze Kopitar's PP goal in the 2nd period. I can definitely see Kopitar's potential beginning to show itself from his past seasons If he keeps this point and performance streak moving forward, he will definitely get noticed outside of the greater Los Angeles area. The noted player of this game was Drew Doughty wearing facial protection due to the puck-in-the-mouth incident in Saturday's game. Jarret Stoll did an awesome job on this play drawing the opposition to him while he was bringing the puck into the Islanders' zone, which left Doughty wide open for the pass. Doughty slapped the puck and got it far side on Marty Biron for his second goal of the season. SICK. 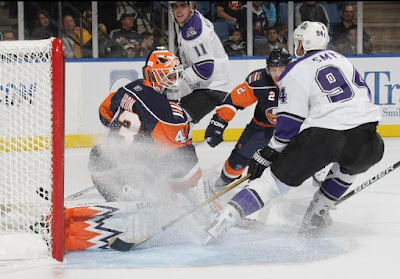 Even though the Kings are 4-1, there are still plenty of things the Kings need to work on, firstly, their faceoffs. Here are the percentages in the circle so far:No need to paint a hazy picture from these stats; they're poor and everyone knows it. The amount of crucial faceoffs being lost is unbelievable. If the Kings gain the possession AT puck drop, it'd definitely reduce the number of heart attacks on my part.

By the way, who scored the lone Islanders' goal? Matt Moulson of course! He was looking quite scragly with his new coif, which probably is very much needed on the east coast. The funniest part about Bob Miller and Jim Fox's discussion of Moulson was his relationship with Jonathan Quick's wife's sister. It was mentioned twice that Moulson was perhaps Quick's future brother-in-law. Now, now, let's not jump the gun. 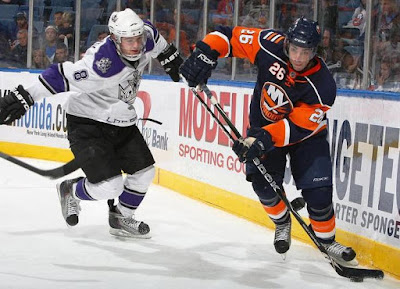 The stats for this game overall weren't impressive in terms of shots on and hits. The Kings had 22 shots while the Islanders had 29. Hits were 22 and 34, respectively. It's fantastic the Kings are getting the wins, but the it's the little things that add up to carrying a solidly performing roster deep into the season. The individual players still have many parts of the game to work on, so that's definitely promising. There is room for lots of growth over the entire season, and I'm (almost) happy with the current team on the ice.

P.S. I love Raitis Ivanans. He played 2 minutes and 44 seconds and absolutely pounded the HELL out of Joel Rechlicz, whoever that is.