A Little More Up And Down Action

Share All sharing options for: A Little More Up And Down Action

Firstly, my apologies for the delayed post. My only excuse: Life is getting in the way.

Currently the Los Angeles Kings are sitting 8th in the Western Conference with 10 points and are 3rd in the Pacific Division. With 9 games in I'm neither ecstatic nor depressed with the results; the Kings are showing that they can compete and that they can take a nosedive at any moment. This was the end of their longest road trip of the year and it just may be the start of something great.

On Saturday evening, I had the unfortunate occurrence of accidentally seeing the score of the game against the Columbus Blue Jackets while watching another game. Too bad Leafs TV is really good about keeping you updated around the league. The Toronto Maple Leafs started their game at 4:00 pm PST; I saw the Kings were down 4-1 around the middle of the 3rd period of the Leafs game, and (since the games began at the same time) I knew the Kings were going to lose the game. How utterly deflating. There is absolutely nothing that can salvage the feeling of already knowing the outcome of a game, especially when it's in favor of the other team.

At first I was upset that I saw the score, and then I was irritated that the Blue Jackets got 4 pucks past Jonathan Quick. Needless to say, I was not very enthusiastic watching the game later. There's something about watching a game knowing your team is going to lose that is very unappetizing. It might have led to my falling asleep at times. That being said, the Kings didn't look THAT bad. In my zombie-like state, I didn't think they played worse than some of their other losses. With that, I'm done with this recap.

For the game I was actually awake and excited for, the Kings decided to bounce back and play like a coherent team yesterday against the Dallas Stars. They won 4-1 to the relief of everyone and proved they can play hockey like professionals. Everything about this game was better than their previous game and capped off this road trip very nicely. They were over .500 in the faceoff circle (thank you Jarret Stoll), ceased taking sloppy penalties for 60 minutes, and collapsed around their own net protecting the goalie. 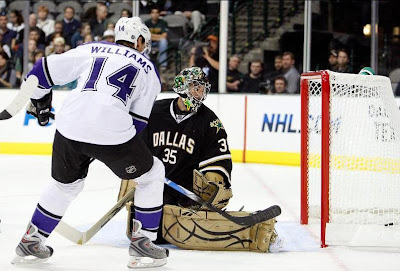 Going into this game, Bob Miller and Jim Fox mentioned that the top line of Ryan Smyth, Anze Kopitar, and Justin Williams had a combined 29 points in the first 8 games. After they picked up another 6 points against the Stars, the top line is sitting pretty with 35. Okay people, I'm fully on board with the Smyth Train. Williams? I'm getting there. Also I'm over Marty Turco. I don't quite understand the love affair people have with him. I've witnessed far too many meltdowns to have any confidence he's going to stop enough pucks to win games for his team. Am I being too critical? I think not, but let me know what you think! 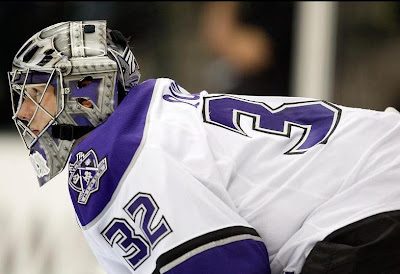 Also Alexander Frolov is on the hot seat. After the poor performance against the Blue Jackets, Frolov was benched for being a turnover machine while also falling down at inopportune times causing goals against, among other things. Rich Hammond of LA Kings Insider posted a transcript of his conversation with Frolov about what happened between him and the coaching staff. Per Hammond: here's what Terry Murray had to say and here's what Dean Lombardi said.

Decide for yourself what really is going on. I personally believe if he doesn't shape up and sign a contract Lombardi-esque, he's going to be sent off to wear a stranger's crest. I will subsequently be heart-broken, but that's only if nothing else negative comes out of this situation.