Back on Top With Two Shootout Losses

Share All sharing options for: Back on Top With Two Shootout Losses

In the third back-to-back of this young season, the Los Angeles Kings lost to the San Jose Sharks and Vancouver Canucks in shootouts and yet they find themselves back at the top of the Pacific Division. Odd, I know; but sometimes weird occurrences just happen. Even though the Kings were not the victors in either game, they were both great to watch. There were hit posts, rush plays, and surprise contributions all over the place. In any other year, these are two teams the Kings usually lose to, but this season is, once again, proving they are on a constant uptick. 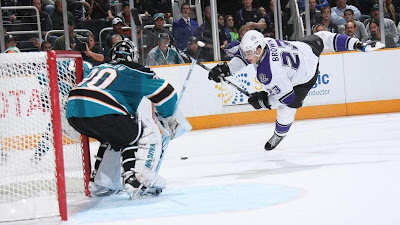 While viewing the game on Wednesday against the San Jose Sharks, I did not realize how much their roster had changed until I saw the lineup. Gone are Christian Ehrhoff and Jonathan Cheechoo; in are Dany Heatley and Manny Malhotra. The make up of their team seems to have remained the same but the difference in this equation is a better Kings roster. That being said, the Kings dominated the first period while the Sharks came back in the second, and the teams battled it out all the way to the shootout. My question here is, "Why was Alexander Frolov left out of the top three shooters?" He had the only Kings goal of the game and was grinding it out as much as the other players, so your guess is as good as mine. It also must be noted that he was left out of the top three shooters against the Canucks as well.

Jonathan Quick played both games and looked solid while Sharks' Evgeni Nabokov and Canucks' Andrew Raycroft looked just as steady. First off, who knew Raycroft could still play! He was hit with 31 shots while Quick had just 15 sail his way. Second, did the Kings not realize that Nabokov was going to stop every shootout shot that went directly towards his chest? I don't get the logic used by the players; subsequently, the Sharks left the arena with two points. 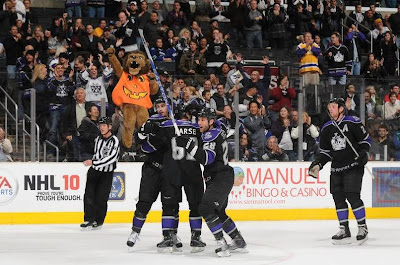 This picture's purpose is solely to show how ridiculous/awesome Bailey is.