Just when you thought the Los Angeles Kings had it all figured out, they open the 2009-10 season with the poorest performance I've seen... since last season! But at least at the end of last season they were playing with full effort for entire games; tonight lacked consistency and teamwork. For example, does Terry Murray really want them to be bunching together at odd places on the ice? Let's make sure we're spread out and covering all the important spots on the ice, mmkay?

I watched this game on a massive delay last night and I've come to realize that I don't think I made a bad decision in not renewing my season tickets. The utterly poor performance of the Kings was quite embarrassing, and I don't think it mattered that they played the Phoenix Coyotes. They could have played anyone and it would have been just as bad. 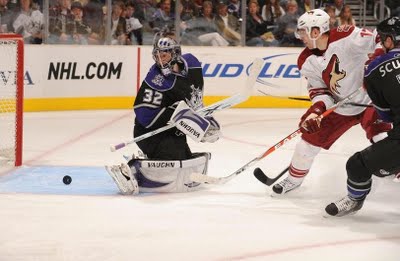 Story of the game

Is it season-starting nerves? Do all the players have the flu? What do you supposed it is? The Coyotes dominated the Kings for basically the entire game, and not all 6 goals against were Jonathan Quick's fault. There were plently of mistakes coming from all over the Kings roster. Drew Doughty was particularly noticably making a some timely (bad) decisions while players like Teddy Purcell and Anze Kopitar were nearly invisible. The most frustrating part of the game was the 2nd Kings goal where they spent nearly the entire PP trying to get the puck past Ilya Bryzgalov. Missed shot after missed shot finally found Kopitar getting the puck in the net off a Ryan Smyth rebound. Ugly.

I must end this post here since I have other things to attend to. The season opener was a poor excuse for effort on behalf of the fans and themselves. I'm sure no one was happy with that so-called performance, so we'll see what happens between now and Tuesday's game against the San Jose Sharks.