From letsgosharks: The Poppy Pin

Share All sharing options for: From letsgosharks: The Poppy Pin 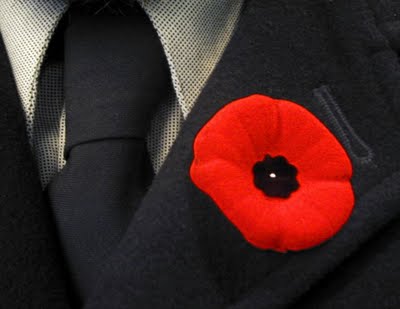 You may have noticed Sharks head coach Todd McLellan and his staff adorning a certain accessory behind the bench on Saturday night, and again last night when the Sharks squared off against the Nashville Predators. It was a simple red flower, hung neatly on each coach’s left lapel. The red poppy, or replica of the flower, probably means little to most American hockey fans, but for a Canadian, it represents something more than just a way to dress up a suit.

The red poppy is worn by many Canadians wear the poppy during the two weeks prior to Remembrance Day. The Canadian holiday, also known as Armistice Day or Veterans Day as we know it in the U.S. , always falls on November 11th. It was on the 11th of November (the 11th month of the year), at the 11th hour of the day, when World War I officially ended.

Canadians celebrate their veterans with a public holiday, but more symbolically, with the red poppy. In the United States , war veterans who made the ultimate sacrifice are traditionally honored on Memorial Day, whereas American honor all veterans, living or otherwise.

While not all the provinces celebrate with a statutory holiday, Canada ’s federal government partakes in several traditions on Remembrance Day, including the reading or singing of "In Flanders Fields", a poem written by Canadian officer and physician John McCrae during World War I after McCrea witnessed the death of his friend, Lieutenant Alexis Helmer.

In Flanders fields the poppies blow

Between the crosses, row on row

refers to the flowers that grew prominently around the battlefields and military burial grounds around Flanders, or what is present day Belgium . "Red" represents the color of blood that flowed so prominently in the war that was supposed to end all wars.

The Montreal Canadiens have the lines:

To you from failing hands we throw

The torch; be yours to hold it high.

inscribed in both English and French in their locker room above photographs of famous Canadian players, reminding current players of the teams history, and the importance of honor in the team’s culture.

This particular passage is also inscribed upon the base of the flagpole at the American Cemetery , Madingley, in Cambridge , England.