Share All sharing options for: Scoring Benchmarks After Game 19 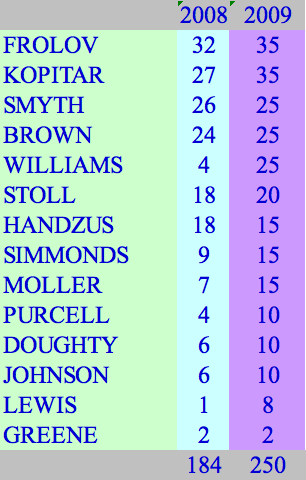 Before the season started, I offered up the hypothesis that, if the Kings were to make the playoffs, they needed to increase their scoring to 246 goals and decrease their goals against to 230. Subsequently, I offered up a template for how I thought the Kings could get to the 250 goal mark. (I rounded up.) I assigned each player what I thought to be a reasonable benchmark. Here is the chart I came up with, back in the pre-season (right):

Now, here's how the team and the players are doing nineteen games in (below): 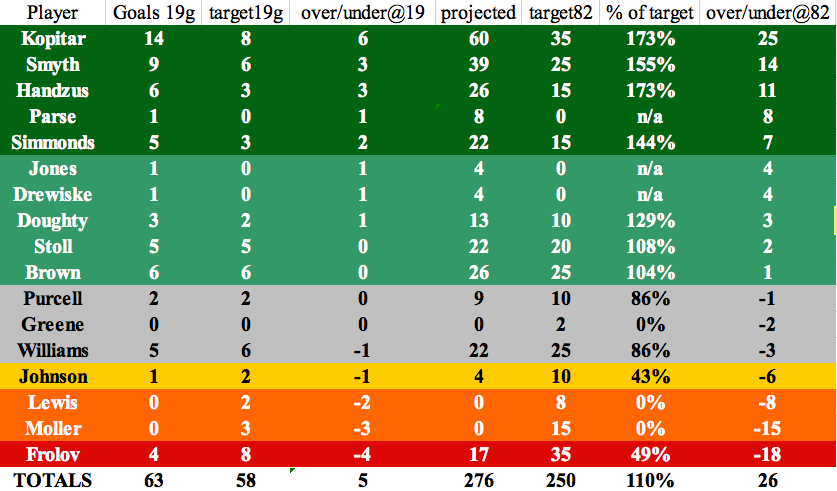 The Kings have scored five more goals than they need to to be on track for 250. At this rate, they will score 276 goals, 10% over the target. What's remarkable is who is doing the scoring and who's not. The chart is sorted by number of goals over or under the target for the season. The five players at the top (dark green) are scoring much more than I thought it was reasonable to expect (obviously Parse was not even on anyone's radar, but as the chart is sorted by the over/under, he jumps way up into the elite group). I budgeted Kopitar for 35 goals. He's on pace for 60. I budgeted Smyth for 25 goals. He's on pace for 39. Handzus and Simmonds are also exceeding my expectations by a long shot. Doughty's surplus, combined with goals from Jones and Drewiske, essentially washes out the underages from Johnson and Greene -- however, Doughty is doing marginally better than I thought he would, while Johnson is doing much worse than I hoped. Lewis and Moller are both in Manchester, of course, so their projected numbers suck. The numbers for the "kids" who are playing now (Parse, Simmonds and Purcell) don't quite off-set the goals not being scored by Lewis and Moller, but it's close. And then there's Frolov, who I pegged for 35 goals and who is on pace for 17. Luckily, Kopitar, Smyth, Handzus, and Simmonds have scored 14 goals more than budgeted, which more than makes up for Frolov's lack of production (-4).