Dean Lombardi Is Undoubtedly Happy that his Draft Pick Stuck Up for a Teammate and Fought an Overager, Despite the Fact that He Got Pummeled and Earned 30 Stitches on His Face for the Honor

Share All sharing options for: Dean Lombardi Is Undoubtedly Happy that his Draft Pick Stuck Up for a Teammate and Fought an Overager, Despite the Fact that He Got Pummeled and Earned 30 Stitches on His Face for the Honor

This is a couple months old, but I just found it.

Drew Nichol vs Geordie Wudrick
This was what everybody was talking about on Sunday - the licking that Oil Kings defencemen Drew Nichol gave Swift Current forward Geordie Wudrick (LA) on Saturday night. As the story goes, Nichol hammered another Broncos player and Wudrick, a tough hombre himself, stepped in to challenge the Edmonton defenceman. 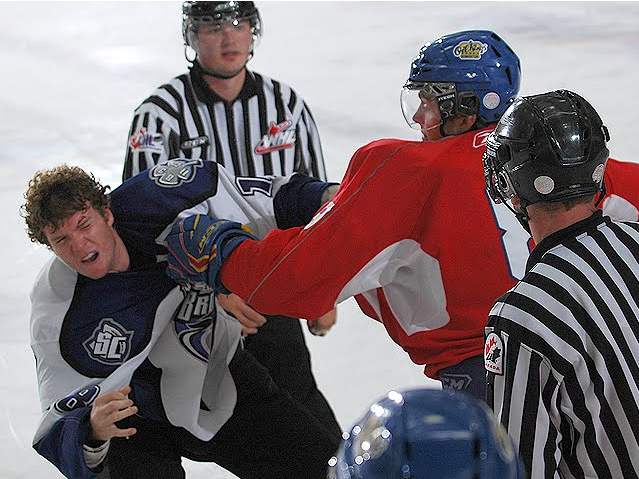 As its been described to me, and I wasn't there so I'm going on second hand information but from about 20 different people, Wudrick was clocked by Nichol above the left eye (see photo above) and immediately started leaking crimson. Nichol, 6'2 and 200ish lb, is on the bubble as one of five 20-year-olds in camp but may have helped his cause with this fight that will undoubtedly make its way through the league's grapevine.

The damage: Wudrick was taken for sewing and I've heard various reports as to how many stitches it took to close the wound. I've been told somewhere between 28-34 stitches but I asked the trainer from Medicine Hat (always good sources for that sort of stuff, they all talk to each other) and he said that Swift's trainer told him that there were 12 stitches inside and 18 more on the outside to close the cut. Another person told me that the gash went bone-deep which above the eye isn't all that shocking I guess. You can tell from the second photo though that the damage was extensive and the quick fight was certainly on eveyone's hot topic list a day later. 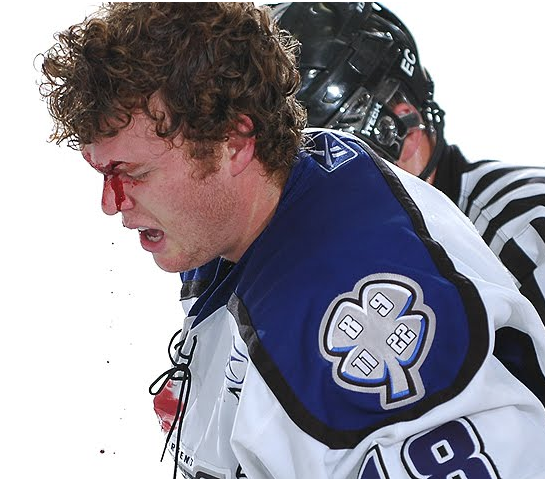 via The Pipeline Show