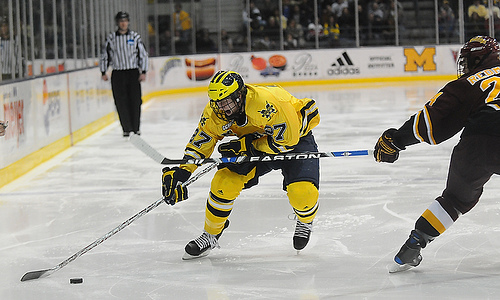 The Plymouth Whalers acquired the rights to University of Michigan forward Robbie Czarnik and have signed the centre to an OHL player agreement. He's expected to make his Whalers debut Wednesday night against the Windsor Spitfires. "We are excited to add Robbie to our lineup," said Whalers President/GM/Head Coach Vellucci in a team release. "His greatest asset is his speed and we look forward to developing him for the next level. What a great opportunity this is for Robbie to continue his education and play in the number one developmental league for the National Hockey League."

He was a third round pick of the Los Angeles Kings in the 2008 NHL Entry Draft. He scored 22 points in 51 games as a member of the Wolverines since the beginning of 2008-09.