The Los Angeles Kings dropped another game and upped the number in the loss column on Saturday when the Calgary Flames and their fans came to Staples. The ending score of 5-2 basically described the play on the ice especially the first goal of the game by Jarome Iginla just 13 seconds in. Fantastic. The two goals scored by Drew Doughty and Alexander Frolov were the only real highlights of the game. They were scored with less than a minute in between them, but other than that, once again, the scoreboard reflected the play on the ice. 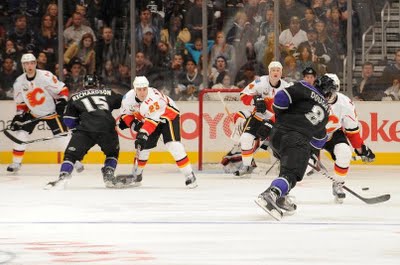 Overall there's not too much to say about this game since there wasn't any improvement in any aspect really. Frolov was put back on the first line and absolutely nothing changed. Surprised? I think not. Ryan Smyth is probably gnashing out his teeth with every game he's sitting out. With Justin Williams still playing solidly and Anze Kopitar's play at a standstill, no one here is questioning the x-factor. C'mon Captain Canada! 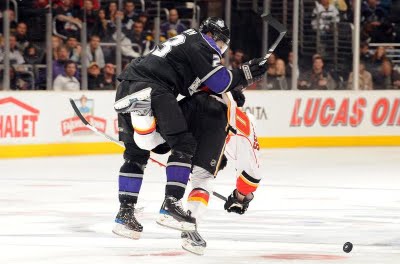 I'm sure that was nice.