On the only day of the season that the Los Angeles Kings have face time on Versus, they decide to dilly dally about on the ice losing to the Chicago Blackhawks 4-1. The game began with a promising first period as the teams battled it out, but the Kings regressed into last season's form and they slowly deteriorated with no chance of saving themselves. They faded in the second period and were virtually non-existent in the third. On paper the sum total of 2 shots on Cristobal Huet in the third was the leading indicator that the Kings were drowning, but visually it was much worse. The team had no connection with each other, but thankfully this has become a rare occurrence this season so I'm hoping this is a slight downhill trend that will right itself soon enough. 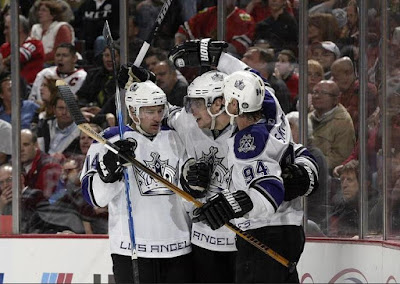 A positive for this game was Anze Kopitar who scored his 14th goal of the season putting him in a tie for the league-leading scorer, Washington Capitals' Alexander Ovechkin. This was basically the only highlight of the game. It was pretty abysmal overall, which is such a bummer seeing this was the only shot for the Kings to be seen on a national (+ Canadian) scale seeing how it was the only game of the night. Alas, they couldn't transition their first period momentum into the rest of the game and Kings fans were left disappointed. 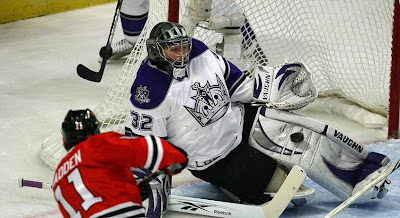 I'm getting a little Negative Nancy, but one more thing. Jonathan Quick was not in his best form either letting out big rebounds and not covering his posts. He definitely had minimal help from the defensemen who were having plenty of difficulties of their own.

This was the first game of a 5-game roadtrip with the rest of the games in the Southeast Division. Moving forward, the Kings face the Atlanta Thrashers tomorrow and all I'm hoping for is for them to get themselves back to where they were so I can breathe a sigh of relief.