Back in the Game; Kings 5, Hurricanes 2

Share All sharing options for: Back in the Game; Kings 5, Hurricanes 2

The Los Angeles Kings faced the Carolina Hurricanes in the second game of this 5-game road trip. They broke a 2-game losing streak by tweaking the lineup a touch and facing a team on its own 12-game losing streak. The 5-2 victory over the Canes was indicative of the latter's play, which looked beyond rough and the Kings exploded out of the gate with a great first period. Ryan Smyth did his job getting his 9th goal of the season in front of the net, and that's basically the bottom line. He's playing his role to a T and I have zero criticism going his way. Jarret Stoll's goal was a bit odd in that I'm not sure he could do it again if he tried. It seemed to be 90% luck and 10% skill. Either way it put the Kings up 2-0 and Randy Jones got his first point as a King. He then went and got his first goal in the third while looking very comfortable in the line up. I'm very pleased with this whole situation of Jones and am hoping it turns out to be a Kyle Quincey-like occurrence. 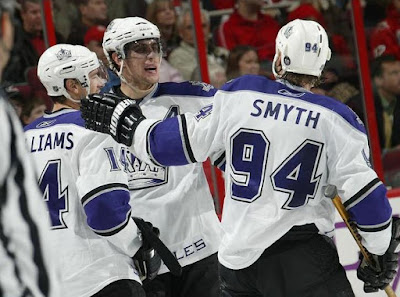 Of course Anze Kopitar had another good game. He didn't notch a goal last night but did get two assists, so thumbs up to him and keep it going! Another roster tweak was that Erik Ersberg got his second start of the season with Jonathan Quick sitting on the bench. Ersberg got the solid win, and yes, he let in two "interesting" goals but I'd rather he shake off any in-game rust against Carolina than any other team right now.

As a team, the Kings had a great first period, began to falter in the second, but were able to finish in definite fashion in the third. Manny Legace was Carolina's best player of the night and gave his team as many chances as he could to get back into the game. Unfortunately, the deal was essentially sealed after Wayne Simmond's goal in the middle of the third period and Justin Williams capped of the night with an empty netter. 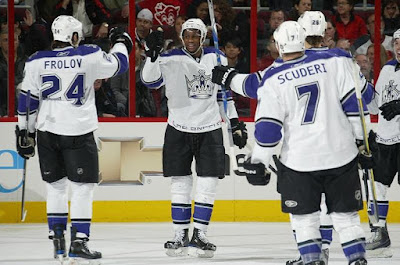 This was a good win for the Kings, which they will continue through the Southeast Division, but there was one slight blemish on the stats sheet from this game. Teddy Purcell. 4:02 of ice time and a -1. I'm in no way angry about how he has completely disappeared the farther into the season they go; rather, disappointment accompanied by raised eyebrows comes across my face every game when I look at his play. His production is almost nil and I'm not sure how much longer he'll stay up with the team. Maybe he needs to be sent back to Manchester for a stint?

On the other side of this NHL/AHL coin, Scott Parse is making a point. He only had 11:44 of TOI but you noticed when he was on the ice. His spark on the forecheck is very noticeable and he's slowly earning his ice time from the coaching staff every game. Parse is how one should make an NHL showing when you're leading the AHL team in points. I'm not saying Purcell won't get there, but for now, he seems to have been pushed to the background for a bit while the rest of the team continues to sort itself out.