The Los Angeles Kings defeated the hottest team in the NHL with a win in overtime. The Chicago Blackhawks came in tonight with a record of 8-1-1 in their last 10 games and brought with them a style I wish the Kings could play with on a regular basis, which is an up-tempo, puck-moving mentality. It took until the second round of the shootout, but the Kings pulled through for the W. Regulation had a lot of open play geared more north-south than anything else, and Chicago far outshot the Kings (33-22) especially in the third period. All of the excitement during regulation was transferred to the overtime frame and continued into the shootout.

Wayne Simmonds scored in the second period to put the Kings up, and it would have been epic if he had notched the game-winning goal in OT. He played a great game and his rise in the past few games has been very impressive. He played only 15:24 tonight but it seemed like he was all over the ice. He was popping up in the correct places and times and was definitely making his presence known. A return for Jarret Stoll was also made very aware with the faceoff numbers for the entire team above .500; 59% to be exact.

While the 4th line is playing more minutes, I definitely didn't think Brad Richardson deserved ice time in OT. He didn't have any business being anywhere away from the bench outside of regulation. I could be a bit over critical here, but let's be serious. One player who actually made the most of his 11:53 of TOI was Teddy Purcell. I noticed him pouncing on pucks and getting in the corners. I think he may just be coming around! One thing to note is his reluctance of getting the puck to the goal on the power play. He's getting minutes there but is like a deer in headlights when he has an open lane. Granted the open lanes only appear for just a second at a time, he should have the confidence to not hesitate when he can see them. 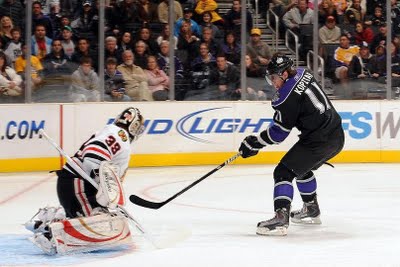 All of the wide open play made for a ridiculously exciting overtime frame with a shootout result left to the goaltenders. Cristobal Huet did not fare so well as Anze Kopitar faked him out and let the puck slide through his legs. Jonathan Quick stuffed both Jonathan Toews and Patrick Kane for the win, and Jack Johnson adds another shootout goal to his numbers, which are now 3 for 5 (60%) this season. Quick's confidence is ticking up with each game and the Kings are looking strong as the league passes the quarter mark of the season.

This gives the Kings another 2 points to keep them 2nd in the Pacific Division. They trail San Jose by 6 points and the Kings don't play until Tuesday against the Anaheim Ducks who are still last in the Pacific. The team is fighting through every game and the best update of the morning was that Ryan Smyth was on the ice for light practice.