Share All sharing options for: Thank You Jack Johnson; Kings 4, Panthers 3 (SO)

Once again it takes a shootout but the Los Angeles Kings pull out another win in the Southeast. They faced the Florida Panthers who were looking quite different from last season. I remember the Panthers to be a team on the brink of shambles, but this season has definitely been much kinder to them. They aren't... last in the Southeast Division, so there's that. The Kings, on the other hand, have another two points to their name bringing them up to 28 points. They have surpassed the Colorado Avalanche (27 ) and only trail the San Jose Sharks (32) in the West.

Like the game against the Tampa Bay Lightning, this contest was a physical battle with one pretty significant difference, the Panthers are more organized defensively than the Lightning. They had a much more aggressive defensive mindset, their forechecking was harder, and their defensive box was much bigger than what the Kings are used to. The extra pressure put the onus on the second D to accept that first pass out of the zone, but missed pass after missed pass put the stress on their own shoulders. In the end, it was another hard fought victory that was less physical than the last game but still saw the shootout. This time around the Kings only needed Anze Kopitar and Jack Johnson to stand at center ice, and Jonathan Quick was his beastly self in stopping all shots taken by the Panthers. 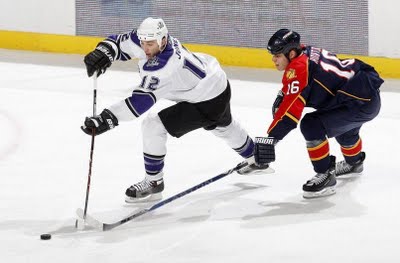 Ryan Smyth left the game twice with an unknown injury. There haven't been any updates released by the Kings so we can only sit and wait... nervously.

Lastly, something that's bugging me: is it legal for a player to sweep away a goaltender's stick when it's laying outside of the crease? I'm talking about moving a goalie's unbroken stick to the boards so it's completely out of his reach. That's exactly what happened to Quick on the weird bounce ending in a goal against with a massive scramble at the goal mouth. It definitely would have been illegal if the opposing player picked up the stick and tossed it away toward the boards, but c'mon, that's so cheap to clear an unbroken stick away like that giving your team a lame advantage. (Replace "cheap" with a harsher word and you'll get what I really mean.) 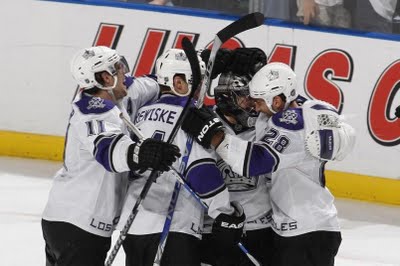 Next up are the Philadelphia Flyers on Wednesday back in Staples Center; they have 23 points and are third in the Atlantic Division. I'm definitely looking forward to this game and grabbing two more points in the standings. I realize I'm getting more and more greedy for these precious points; I can't help it. It feels so great when the Kings rack them up because it means the Pacific Division is looking more in their favor and those in the Eastern Conference are noticing more and more. Having a winning team is creating an almost (but not-yet) insatiable lust for more points!