The Los Angeles Kings hosted the Pittsburgh Penguins last night and proved they deserve to be at the top of the standings. Things are clicking for the Kings and they show no signs of slowing down. Anze Kopitar is on FIRE and his line mates are providing support for him all the way. He is dominating the games the way he should have been doing last season.

Last night his first goal was scored less than 30 seconds in was the best wake up call the Kings could have given to the Pens who have been doing very well for themselves so far this season. Sidney Crosby looked mortal and ended the night with a -1. This game wasn't won on pure luck but hard work by everyone on the roster. 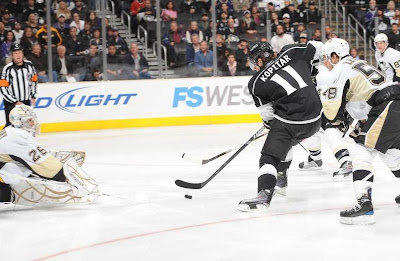 I'm not sure what was more surprising: both teams scoring on their first shots on net or the 23 seconds between Jarret Stoll's goal and Michael Handzus' goal in the third. Actually, the latter was more surprising for me because no one is doubting Kopitar's production. I absolutely loved Stoll's exuberance from scoring on Marc-Andre Fleury. This was his 4th goal of the season and his faceoff percentage was back to normal at 83%. I'm not sure how Fleury was feeling last night, but I was sure how all Kings fans were feeling; total excitement and happiness. Two things Kings fans have finally been able to experience beyond a game-by-game basis. 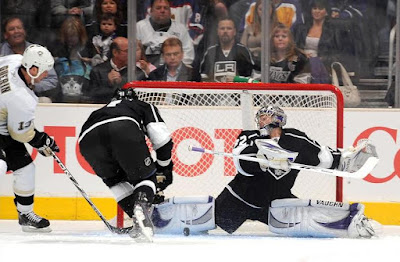 Jonathan Quick had two of the sickest pad saves and led the Kings to their victory. The San Jose Sharks sit two points higher for the Pacific Division lead and the Kings are vying for that spot. At this point in time, the Kings don't need to look at those in their rear view mirrors anymore. The focus is forward for every game.