A Dismal Outcome and Another Lease At Life

Share All sharing options for: A Dismal Outcome and Another Lease At Life

In another back-to-back stint, the Los Angeles Kings had one fail and one lucky night. I missed the game on Friday night where the Kings faced the Atlanta Thrashers and I'm glad I did. I was fully planning on watching the game when I got home, but accidentally seeing the score caused bile to rise up from my stomach. Consequently, I did not watch the game and ended my night on a happy note. A score of 7 to 0 is plain ridiculous and there's no reason to waste my time watching a contest like that. Plus the Chinese food for dinner mysteriously put me to sleep by 10 pm. Go figure.

The stats sheet showed an insane slew of penalties, which leads me believe it was a chip-fest to the end. I saw a few highlights, but not enough to make logical conclusions from the stats sheets. I seem to remember the Kings game against the Thrashers last year ended in a 7-6 OT victory. So two years in a row prove to be strange games. I'll let this one go for now. 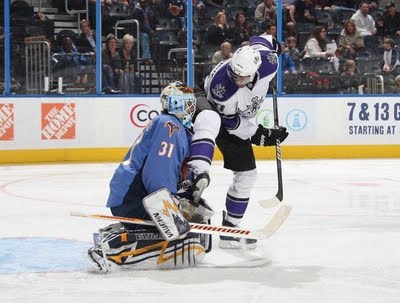 On Saturday night the Kings were in Tampa Bay to face the Lightning in their Bolts jerseys; gross. Overall this game was surprisingly even. The shots, hits, and faceoff percentage were virtually identical. Both teams had big opportunities and both also had flubbed chances. The game could have easily gotten boring at multiple times, but they were fighting for possession and control every single shift and neither goalie had too much downtime at any point in the game. Case in point, Antero Niittymaki and Jonathan Quick had identical saves robbing the other team of sweet, sweet goals. (If I can find a decent highlight package, I'll update.)

Steven Stamkos was definitely the standout from the oppostition, but it was a joke the way he cross checked Drew Doughty. I'm not being defensive about the situation; Stamkos took his shot from the point, Doughty blocked it like a man without falling to the ice, and Stamkos cross checked him in the chest for no apparent reason. Perhaps there were words exchanged but, really, Doughty is the better player here. Thank you very much.

By the way, Wayne Simmonds getting a roughing penalty after taking an elbow to the head was complete BS. That is a joke to have something like that get by the refs when there are two of them on the ice. I find that unacceptable and the Lightning color commentator sure acted like he didn't see it either. Where's Jim Fox to not be a homer and tell it like it is? I hate watching a telecast run by homers; makes me sick. 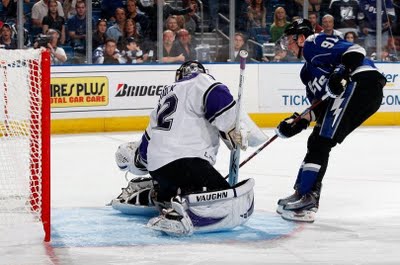 On the flip side, the game went into OT and the battle continued 4-on-4. A Lightning goal was scored and it seemed to be over. But, but, but. The refs huddled and then went to take the call from Toronto. It was deemed not a goal and play continued. Here's where I pause and give credit to the refs who actually had the balls to call back the entire Lightning team after they had flooded the ice and the coaching staff already left the bench. Quick could have possibly stopped the incoming shot were it not for the deflected-Andrej Meszaros shot. Paul Szczechura passed in front of Quick inside the blue paint and the puck was in the back of the net, but an interference call brought the teams back to reality.

The Kings got a second chance at life. They literally got a second chance to change the outcome of the game, which they were able to do. After a stressful rest of overtime, the teams went into the shootout with Anze Kopitar, Jack Johnson, and Dustin Brown taking the shots. Kopitar was his usual awesome self but the other two tried glove-side, which didn't result in goals but Quick was the wall at the other side of the rink to shutdown all of the Lightning players who took their attempts. The game ended with the Kings getting two more points and another win the the W column.

The Kings are still second in the Pacific Division and are in a three-way tie for third in the Western Conference. I can't do anything but smile at those numbers. I'm definitely not waiting for them to falter down the standings anymore. They are at the top not because of a fluke; they're there because they are working hard every night and getting the effort in. There is very little to be disappointed about in these first two months of the season and I'm expecting the rest of the season to pan out that way. Tomorrow they play the Florida Panthers for the last game of this road trip. The Panthers have won their past two games but have only 15 points so I'm hoping this will be another well-fought win for the Kings.