It is very clear that Anze Kopitar needs Ryan Smyth. The Los Angeles Kings hosting the Philadelphia Flyers was one I knew would be a feisty battle to the end. I can retrospectively say this was probably the worst game for Smyth to be out of the lineup because the Flyers came to Staples Center and left with a bashing victory. This game was wide open due to missed passes and subsequent turnovers, and the Flyers were all over the place pouncing on loose pucks and misreads by the Kings.

The first 10 minutes of the game were north-south to the max. The feeling out process for teams in different conferences takes a bit of time, and thankfully the Kings were the first to gain control. Jarret Stoll was able to score off a sharp angle on Brian Boucher for the first goal of the game. (I seem to remember Boucher letting in a similar goal last season when they faced the San Jose Sharks.) The second period went back to neither team dominating causing an overall manic feel and the third was flat out frantic. The 5-on-3 advantage the Kings had should have slowed the game down drastically in their favor, but it was just about the worst man-advantage I have ever seen. The Kings couldn't get the puck past the offensive blueline let alone set anything up. The Flyers were aggressive all around and the 2-man advantage expired with nothing to show for it. 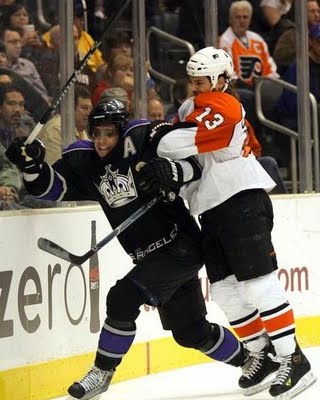 Let me make it clear that Alexander Frolov doesn't belong on the top line. I'm not saying he played terribly; I'm merely saying Frolov is best served on, at most, the second line. He was supposed to up his game and compliment Kopitar and Justin Williams on the first line, but nothing changed for Frolov. He looked the same and I'm not sure what to say other than there will be a different left wing on that line Saturday against the Calgary Flames. Williams, on the other hand, had a strong showing with 8 total shots on net. Kopitar had 6 shots while Frolov had only 1. As a team, the Kings landed 39 shots on the Flyers goaltender with Jonathan Quick seeing just 20. 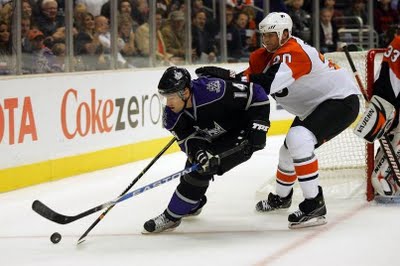 This was a high hitting game and I was mildly impressed with some players and not with others, as is usually the case. In this particular game, Teddy Purcell stepped up his visibility a touch while Davis Drewiske did not. I'm not going to strategically analyze their play for this one game; rather, I'm just going chock it up to playing in modified lines against a team they are unfamiliar with. (Let me know when that line gets old.)

The incredible high/low light of this game was the rolling puck parallel to the Flyers' blueline that could have led to the Kings tying goal with just seconds left in regulation. The insanity at the end of the game could have tilted just one degree in favor of the Kings, but it predictably didn't and the large "L" loomed upon them on the stats sheet. That, my friends, is the definition of heartbreak.