Share All sharing options for: I Love Consistency: Kings 2, Flames 1

The Los Angeles Kings had a great showing last night in their 2 to 1 win over the visiting Calgary Flames. The action was great and I can't say I've been disappointed with any one particular player as of late. Although there was one surprise from my point of view; I felt like the Kings dominated the Flames in virtually all facets of the game (except for the PK, which the Flames attack more aggressively than any other teams I've seen so far this season), but there was one particular stat that I found quite surprising. It was that the Flames outshot the Kings 27 to 16. Only 16 shots? That is pretty amazing considering how much time the Kings had possession of the puck.

Stream of consciousness to follow: Did anyone else notice that Justin Williams had a ridiculously fantastic game? He was definitely the standout for me registering the primary assist for Jarret Stoll's GWG in the second period. Stoll has also been strong on every shift; he played 19:25 last night and I think he has deserved every minute. Speaking of more minutes, Brad Richardson has been rewarded with more and more time and has been effective on all shifts as well. His hop has been pleasantly surprising along with Scott Parse's continued production. It's fantastic that these guys are utilizing their short amount of minutes, and I've been very pleased all around with everyone's play. 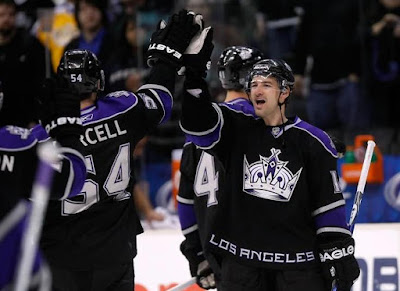 There's obviously the elephant still in the room with Anze Kopitar's lack of scoring. It has been quite a while (I'll admit), but I personally am not panicking. I'm sure everything will smooth itself out in the near future (a.k.a when Ryan Smyth gets back in the lineup).

Oscar Moller was called up for this game, and it's looking like he will stay for awhile. Awesome for him and for the fans. Once again, no complaints here.

Final thought on the game: Raitis Ivanans actually dropped the gloves and scraped it out with Brian McGrattan. Finally! Ivanans is doing what he's supposed to be doing.

I've been a little behind on the updates, but the best one of month is that the 2010 NHL Entry Draft will be held in Los Angeles!!! I'm incredibly excited for the entire event and will be counting down the days the closer it gets. Click here for the logo, which I think is sharp.

Drew Doughty's birthday has come and gone. He is now a ripe 20-year old. Crazy.