Another One Bites The Dust; Kings 3, Oilers 2

Share All sharing options for: Another One Bites The Dust; Kings 3, Oilers 2

The Los Angeles Kings lose one in Vancouver last night and win one tonight in another back-to-back. With Jarret Stoll, Wayne Simmonds, Ryan Smyth, and whoever else out of the line up, the Kings had to lose another key player in tonight's game. Jack Johnson "took one off the ankle" in the first period and was basically out for the rest of the game. Just great. It's no secret the roster has been slowly picked off by the injury monster, and tonight was no different. The Kings faced the Edmonton Oilers with a win to go into Thursday's game against the Calgary Flames still atop the West.

The rock for the Kings has been Jonathan Quick all the way. Erik Ersberg sat out this back-to-back but I felt quite comfortable with Terry Murray going with the number 1 goalie for these important games before the 8-day rest. On a personal note, I missed last night's game because, for some reason, I was recording the "wrong feed." Apparently there were two feeds coming through from Vancouver and I was on the one with horrible audio and no video. I don't even want to go into the logistics of what in the hell was going on there, but I ended up not watching the game at all. Just as well; all reports led to the conclusion that the Kings laid a rotten egg in a 3-1 loss. Gross. 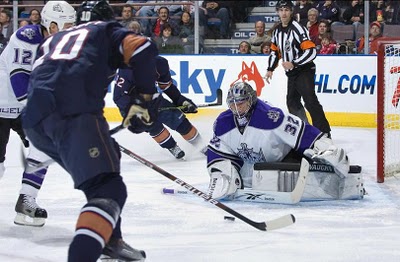 On the other side of "gross," Brad Richardson had a great game notching a goal and an assist with a line mate who was equally having a great game in Dustin Brown. Speaking of, it definitely looked like Brownie was hurting after he scored his goal. Slamming into the boards when you're horizontal usually doesn't produce a good result, but he got up and was back on the ice as soon as he could. He had great chemistry with Richardson and I'm starting to see a glimpse of maybe why the Kings traded a second round pick to acquire the latter.

I'm glad Raitis Ivanans went at it with JF Jacques, but, man, a 2, 5, and 10? See ya later, Raitis. Hope that locker room keeps you company. Someone who actually stayed on the bench the entire game was Corey Elkins making his NHL debut. The consensus? He's a rookie kid. No one should be surprised by this non-revelation and I'm positive he'll be better in his next game. With having so many kids in the lineup, the shorthanded roster spread out the minutes with Matt Greene making a big showing with six registered hits and seemingly getting under the skin of Dustin Penner. Sheldon Souray and Ryan Potunly tied up the game with one goal each, but veteran Sean O'Donnell closed out the game with the winner from the point.

This current swing through Western Canada isn't breaking down doors; one win and one loss is decent and I'm content so far. The Kings were due for a loss and having it come against the Vancouver Canucks doesn't break my heart in the least bit. They always find a way to stick it to the Kings, so I'm fine with just moving along. They have one more game before this long Christmas break and I'm thinking that I should take a screen shot of the standings because you never know how long something like this can last.