A Game of Shinny; Kings 6, Senators 3

Share All sharing options for: A Game of Shinny; Kings 6, Senators 3

The win tonight against the Ottawa Senators marks the third win in a row for the Los Angeles Kings. The difference from this game to the past two was that tonight it felt like neither team was in control from one shift to the next. Even Jim Fox described it as a game of shinny, very wide open with not too much dominance overall. I was neither impressed with anyone on the Senators just as I was unimpressed with any one player on the Kings. Obviously different players had flashes of elite play, but nothing toooo impressive. Even Justin Williams seemed lackadaisical about his two goals at the end of the game. Awesome for him, but everything was all over the place!

A great stat from the night was that Michal Handzus and Anze Kopitar both rocked it in the faceoff circle with 81% and 80%, respectively. Also, Wayne Simmonds has continued to impress everyone watching. Tonight he drew a penalty shot where he faked out Mike Elliott and slide the puck between his legs getting the lead back for the Kings. I'm so pleased with his entire game and development so far this season. Go Simmer! 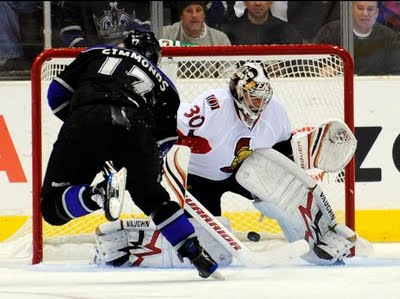 The most surprising part of the game was the goal by Randy Jones in the first minute of the game. In the past that would be the kind of thing the Kings wouldn't be able to do. I seem to recall a game against the Detroit Red Wings two seasons ago where the puck dropped and I could feel it in my bones that the Kings would utterly fail. As predicted, Henrik Zetterberg scored about 51 seconds into the game. Someone can check that number, but I don't think I'm too far off since that memory is seared into my memory bank.

The power play still needs some work. The Kings had two 5-on-3 opportunities back-to-back. That's all I need to say about that. My apologies for the short post and the fact that I'm jumping around a bit, but life is getting in the way for now. There will be some changes coming in the next few weeks around here, which I'm very excited about. I'll let you all know what's going on when it's time.

Until then, go Kings go!