I Was Happy For 12 Seconds

Share All sharing options for: I Was Happy For 12 Seconds

The Los Angeles Kings have played two games since Christmas and have zero points to show for it. They've lost to the Phoenix Coyotes (3-2) and Minnesota Wild (4-3); both were one-goal games and both were heart breakers. The Kings had a 6-on-3 to end the game against Phoenix with a flurry of pucks at Ilya Bryzgalov but the clock wound to 0:00 and my adrenaline died. The game last night against the Wild was played at a pace that I wish the Kings could maintain at all times. Alas, they were outmatched in the last few minutes of regulation as the Wild shut the door on them.

Drew Doughty showed up by attacking the offensive zone for a goal that the team desperately needed. The Kings have been taking one too many passes for their own good. (Scott Parse, when you're in the slot with the puck, take the goddamn shot!) So I say "thank you" to Doughty for getting his behind to the net and putting the Kings on the scoreboard. The goal by Parse to tie the game at 3 apiece was great, except for the fact that Eric Belanger slapped them in the face 12 seconds later. The Wild got their go-ahead goal and gained two more points. 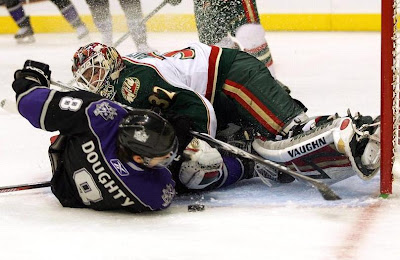 You can't deny the effort and drive is there for the Kings to get as far up the standing as possible. At the same time, they're meeting teams just as hungry as them, which makes for high-paced drama at every turn. They could have been floundering at the bottom of the standings like in the past few seasons, but they're fighting every game and I can't fault them there. I think they're doing as well as they can while trying to stem the injury floodgates at the same time.


How do I feel about Teddy Purcell being on the top line? I'd call it a work in progress. Having Justin Williams out of the lineup is bad, but losing him to a broken leg is worse than people realize. He was the solid player on the top line while Anze Kopitar was struggling to find his game after Ryan Smyth left the lineup. Now that Smyth is back and Williams is out, we'll all be sitting on our hands waiting for Terry Murray's next move. I'm not sure how this is all going to shake out, but check back in for more thoughts and opinions about this topic.

Michal Handzus has been names to the Slovakian team for the Olympics. Awesome. I'm looking forward to whom from the Kings is named to Team Canada and the US team.