Kings are in the New York Times

Share All sharing options for: Kings are in the New York Times

A snippet from the New York Times article (the whole thing is linked below):

With Little Fanfare, the Los Angeles Kings Are in the Playoff Chase

They entered Thursday night’s game against Detroit with a 25-15-3 record, and their 53 points placed them tied for sixth in the tightly bunched conference. Any questions about their staying power were seemingly answered in the last week with impressive wins against the division leaders Washington and San Jose. Their 6-2 romp Monday at San Jose gave the Kings a 3-0-1 record against a team that carried an eight-game winning streak and the best record in the N.H.L. into the game.

The question surrounding the Kings is whether anyone cares.

Years of losing and mismanagement and the lockout of 2004-5 have dented the fan base, but there are others who have lost interest, too. The Los Angeles Times, until recently, rarely traveled with the team, a circumstance that prompted the Kings to hire a popular newspaper blogger to cover the team for its Web site.

When the Kings left last month for a three-game trip to Canada, they were in first place in the conference in December for the first time since 1991. But none of the games were televised back home. And when the Kings have been on television, their audience is shrinking. Ratings are down 21 percent from a year ago at the same time, to 17,000 households per game on Fox Sports Net affiliates.

via With Little Fanfare, the Los Angeles Kings Are in the Playoff Chase - NYTimes.com.

However, that's Brandon Segal. Not Oscar Moller (the caption says Oscar Moller, until they fix it and make me look crazy): 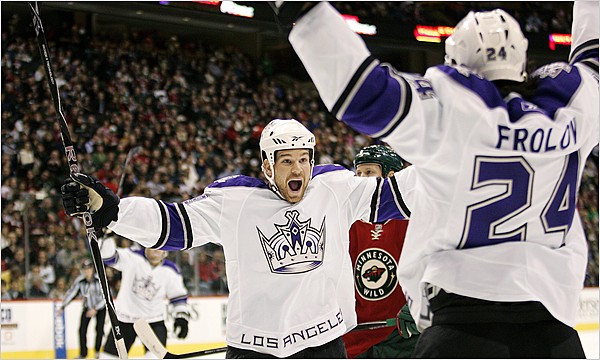