Extra! Extra! The Kings Are Mortal!

Share All sharing options for: Extra! Extra! The Kings Are Mortal!

After watching the Los Angeles Kings throw everything at the Detroit Red Wings including the fixtures on the toilet on Thursday, it was hard to get up for the game against the St. Louis Blues last night. There was basically nothing the Kings could do to match the intensity and desperation they showed on Thursday, but I faithfully watched the second game wondering what was going to happen. Let's just say the number of hits to Blues' faces matched the number of shots on Jimmy Howard.

I can't remember the last time I was brought to tears from the result of a Kings game, but my mascara was definitely being smeared from under my eyes after Darren Helm spun away from Sean O'Donnell in the corner only to beat Jonathan Quick through the legs after a poke check loosened the puck from Helm's grip. The remaining 17 seconds had my hands occupying my eye space from the sheer output of effort and sustained attack from the Kings, which is usually the complete opposite in these games. I couldn't believe how quickly I was brought to my knees after Ryan Smyth had me running down the hall screaming with his power play goal late in the third period. I was expecting nothing other than overtime to come around after the tying goal. Maybe next time I shouldn't be so expectant of an outcome. 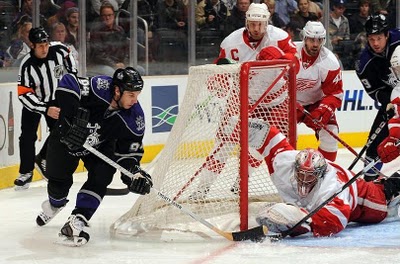 When one is given the task of following a great act with his or her own, the pressure to "bring it" is as heavy as an anvil on the chest of the performer. For the Kings, it's a rare occurrence to have an insane effort result in a loss knowing they will have to follow it up with a game against a team possessing a boring yet (arguably) similar style of play to their own. This was definitely the case against the Blues at the Staples Center on Saturday night. The slow start let me know it wasn't going to be anything like the Red Wings game a mere two days earlier. The biggest difference was the underwhelming performance of Quick. Perhaps the sheer number of games has caught up with this young pup, but the goals against were ugly and he was yanked after letting in four unsightly ones. Erik Ersberg stepped in with a little over 13 minutes to play, which was about the time where the Kings decided they wanted to try and win. Anze Kopitar and Dustin Brown notched a goal apiece, but it wasn't enough to get the tie and at least one point.

There are a few things from the game I wanted to mention because I found them fascinating. The first is that apparently the Blues have one of the highest penalty killing percentages in the league. Where did that come from? The other is the annoying fact that Raitis Ivanans doesn't fight. Sean O'Donnell and Matt Greene scuffled against Brad Winchester and BJ Crombeen, not respectively, while Ivanans did nothing. The roles of the aforementioned Kings players are obvious and need not be explained. Let's fix this picture, people.

The next game for the Kings will be tomorrow against the San Jose Sharks. I'm not sure the outcome here since I predicted the Kings would go 5-2 during this seven-game home stand and that they would split the two games with the Sharks. They're already two down and another loss wouldn't look very good to the misty-eyed Kings fans who were hoping this squad could actually make the post season.