I would like to buy some points. How much are they?

"Our problem under this new system [with the salary cap], is OK, I can’t pay you as a forty-goal scorer," Lombardi explained. "I’m not sure I can pay you as a thirty-goal scorer. I like you, even if you stay the same, I think I can win a [Stanley] Cup for you in this role. But if a player has to get X amount of dollars, he has to fill [the] role [that fits that dollar amount]."

"Do I like the guy? Yeah, but I don’t like him at $9 million because I’m not getting all those things. Using that philosophy as we move down the line, do I like him at $5 million? Well, I’ve got to have this and this. Do I like him at $3 million? Yeah, because I only need this."

This got me thinking about points (the goals and assists kind of points). Obviously, points are not the only reason players get the BIIIIIG bucks, but it's, well, most of it. As Dean Lombardi* said, "you have to be everything." So, when you look at the big cap hits and the big scorers, who is the best value?
*warning: I'm going to use everyone's full name at least once in order to force the post editor to tag everything properly. This might get ugly...

I started with the top salaries by cap hit, from Alex Ovechkin down to Anze Kopitar, and then went a little below Kopi to grab some other names I was curious about, especially guys the Kings didn't sign (e.g. Marian Hossa, Martin Havlat) and guys the Kings traded or otherwise lost (e.g. Mike Cammalleri, Patrick O'Sullivan). Last, I threw in several Kings forwards, some of whom are still on entry level contracts. Obviously, that's not a fair comparison. You can mentally delete them if you like. I kept them in because it gives me an extra dimension for comparison, and also it makes me laugh. 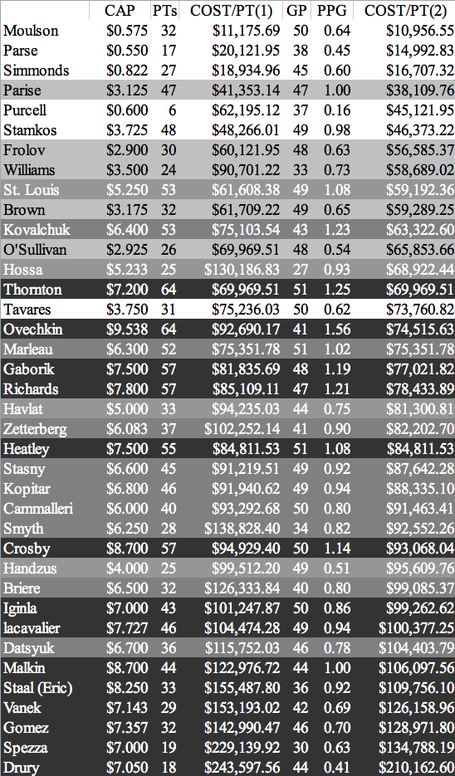 Some observations: first, the obvious... Entry-level players are a better deal than multi-millionaires. Thus, all the names in white background at the top of the list. I put Purcell in the chart just to see if there would be a difference between a successful cheap player and an unsuccessful one. There really isn't. Purcell isn't the value that Scott Parse or Wayne Simmonds are, but he's still close to the top, point for point. (Obviously, just because entry-level contracts are a better value per point doesn't mean you can skate an entire team of entry level contracts. For one thing, the big guns draw the defense, leaving the little guns more room to score. But that's just one of about a thousand reasons.)

Which leads me to the second obvious point: the bottom of the list features some players whose contracts are generally considered to be...um...overpayment (e.g. Scott Gomez, Chris Drury).

The middle of the chart is the most interesting. The darker colors represent bigger cap hits, so dark colors high on the list define a subset of expensive players who are worth it. Among the middle-weights (light gray with black font), Zach Parise, Alexander Frolov, Williams, Dustin Brown and O'Sullivan are all good values, in the top half of the list. Williams becomes much less valuable when we sort by COST/PT(1), because his long-term injury destroys his numbers. But Frolov, Brown and O'Sullivan are all kind of surprising, considering how underwhelming their seasons are supposed to be.

The next most expensive group (darker gray with white font -- the $4-5MM club), also has some good values (Martin St. Louis, Hossa -- when you take Hossa's injury out of it), Havlat somewhere in the middle (which comports with his underwhelming season so far) and Michel Handzus at the bottom. Since Handzus is a defensive specialist, I choose to ignore this, except to acknowledge that he is generally considered to be over-paid for a third line center (I personally think he's worth it, given that he's the hub of the defensive system).

The next group (the $6MM club), is led by Ilya Kovalchuk. Kovalchuk is by far the best value per point of any player with a cap hit over $6MM. Marleau is next, followed by Henrik Zetterberg, Paul Stastny, Kopitar, Cammalleri, Ryan Smyth, Danny Briere and, finally, Pavel Datsyuk.

The fact that Kopitar is a slightly better value than Cammy is good news, I guess. Mostly, I am surprised that he isn't down closer to the bottom with the really expensive guys. In other words, just looking at points, we're getting our money's worth more than we generally think.

Of the most expensive group: Joe Thornton (rocks), then Ovechkin, Marian Gaborik, Brad Richards, Dany Heatley and Sidney Crosby (I note that two of those names were UFAs last summer). The bottom four are essentially busts. Between Crosby and Eric Staal are some disappointments relative to cost.

However, that's not the whole picture, as we will see when we sort the same table by PPG, high to low. 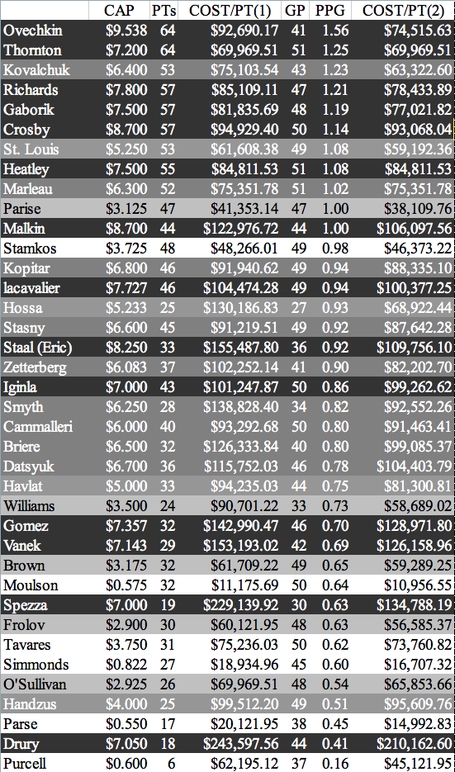 Now we see what we're paying for. The black names rise to the top, the black "busts" stay at the bottom, Kovalchuk shoots to near the very top, and I would argue that all the non-black names above Iginla (e.g. Zetterberg, Hossa, Kopitar, Steven Stamkos, Parise, Patrick Marleau, St. Louis and Kovi) are the real winners here. Kopi's PPG is about the same as Marleau's which is nothing short of amazing since I keep wishing we had Marleau and I keep feeling down about Kopitar. (maybe this has something to do with Marleau blowing past Kopi last night, en route to one of his two goals.) The gathering of white names down at the bottom of the list is not surprising, except that I am a little surprised that Tavares is on pace with Simmonds, Parse and Matt Moulson (with Moulson leading the pack). Even a half-point per game is nothing to sneeze at. Though obviously Teddy Purcell's problems are revealed by this chart.