Apropos of nothing: 50 goal scorers by season since 1942

Share All sharing options for: Apropos of nothing: 50 goal scorers by season since 1942

Over at LAKingsinsider, a commenter wondered why there aren't as many 50 goal scorers as there used to be. I wondered if that were true or not. Hence, chart: 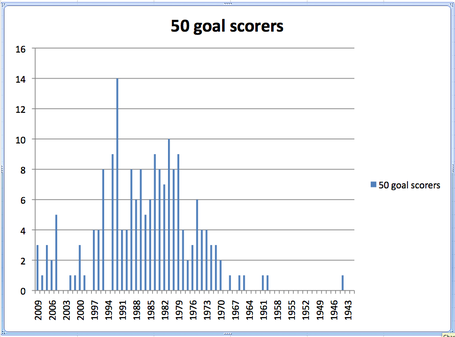 Then 76 for two or three years, followed by a couple of 78s, then 80, and finally 82, though I'm too lazy to look up those last several changes.

The main thing I notice is that you only started to see multiple 50g scorers after expansion from the Original Six, and it really took off after the absorption of the WHA leading into the Gretzky years. We appear to be back to the 1970s levels, more or less. But I'm hesitant to draw any conclusions from this, other than expansion is a factor, slow-puck sucked and curved sticks and Europeans are good.

Of course, if you limit your definition to "50 goals in 50 games," the chart looks a little different: 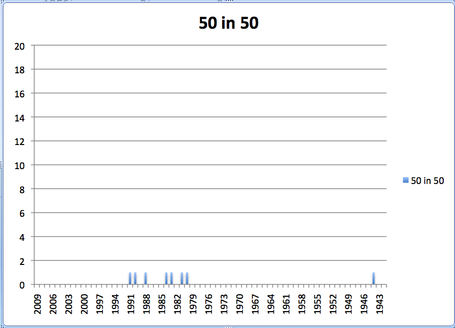