Not that It Matters, But I Can Prove His Stick is Lower Than the Crossbar

Share All sharing options for: Not that It Matters, But I Can Prove His Stick is Lower Than the Crossbar

First up, the ref's view at the exact moment Smyth's stick contacts the puck. 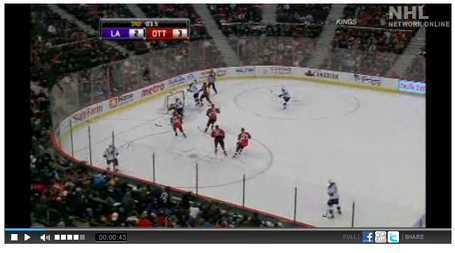 Slightly closer, same lousy view (if you're the ref): 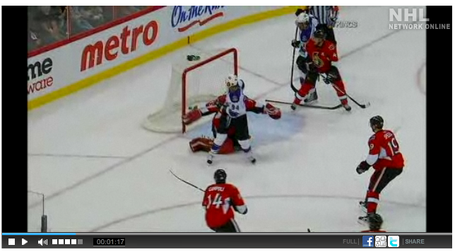 Now, two captures of the tip. Note the (slightly downward) angle and position of Smyth's stick. The first capture shows the puck right next to the heel of the stick. 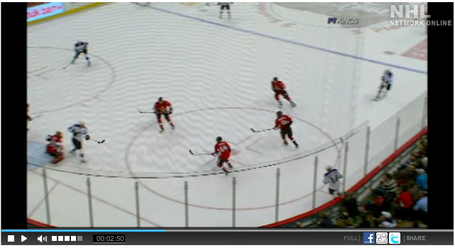 Now here's the same sequence, an instant later. Note the puck in the back of the net. Note that Smyth's stick is now higher. If you watch the replay, you can see in fact that Smyth brings his stick down to tip and then up after the tip. 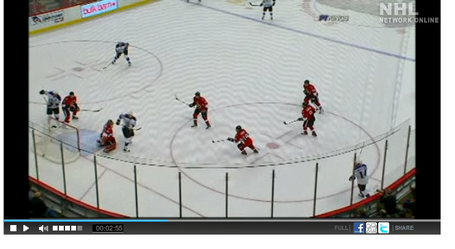 Puck on stick/stick-down. Puck in back of net/stick-up. With that information, go back to the picture at the top of this post. Note the level of Smyth's stick and the location of the puck. The puck, bouncing on the ice, shows that this photo (the Getty photo at top) is in sequence between these two screen captures, which means that Smyth's stick, in the Getty photo, is moving up. Therefore, on the tip, the stick was lower than it is in the Getty picture. And it's no higher than LEVEL with the crossbar in the photograph.

So it's a good goal. Not that the ref could see that one way or another.