Little Bits of News You Didn't Have to Dig Up Yourself

Share All sharing options for: Little Bits of News You Didn't Have to Dig Up Yourself

·       Bourne's Blog ruminates on Burke's weekend trades and composes a sentence that resonates through every bone of my Kings-obsessed body: "Burke knows one thing – players that are good-but-not-great are easy to come by.  You need the difference-makers to win." Also, there's this gem: "How insufferable will Toronto fans be if Burke manages to transform [the team].  It’ll be like mixing crappy Flames fans with obnoxious Yankee fans.  Plus, about 55,000 people already have one foot on a bandwagon that would immediately collapse under the weight all the new 'diehards'." (Canadian Shake-ups, NHL Observations | Bourne's Blog)

·       On the Forecheck looks at schedules. Good for Kings, bad for everyone else. One potential pitfall for the Kings, which he doesn't mention: they have many more home games than road games. (Strength of schedule could make or break NHL teams' playoff hopes - On the Forecheck)

·       Dennis Kane evaluates the rebuilt Canadiens. "The plundering of the team, the hiring of so many new guys – Gomez, Cammalleri, Gionta, Moen, Spacek, Gill, Mara, Bergeron,etc. etc, has made the team worse." (Dennis-Kane.com | The Remaking of the Team Has Done Wonders) 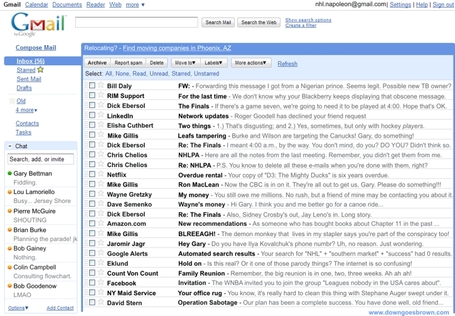 ·       The Puck Stops Here thinks Sutter lost it: "These trades call Sutter’s competence into doubt.  You do not improve your team by selling players when their value is at an all time low." (KuklasKorner/The Puck Stops Here : Calgary In Panic Mode)

·       The Strangest One of All gives Sutter the benefit of the back-handed doubt: "Unless Sutter has completely lost his mind and just is making himself become the Mad Hatter and moving people for the sake of moving, there has to be a meaning to all these moves he's making." (The Strangest One Of All: The Fine Art of the Early Trade)