Jonathan Quick is taking a few days to experience the miracle of childbirth. Jonathan Bernier, the Kings' 2006 1st round pick (and literally the first pick Dean Lombardi made upon his arrival in LA), the so-called "future of the franchise," and the best goalie in the AHL this season, has been called up and, by now, has arrived Dallas. Terry Murray says he hasn't decided who to start. Helene Elliott says Bernier is likely to and expected to start. The poll on LAKingsInsider is 2:1 in favor of Bernier, but that's not a ringing endorsement, as the comments section bears out. The argument that Erik Ersberg should get the start is, variously (from the above-linked comments): that he's earned it, that he has more NHL experience, that he needs to get in a start or two to shake off the rust in case he's needed in the playoffs, and even (my favorite) that if Bernier does well, Quick's confidence will be shaken. Because, you know, Quick is twelve. There also seems to be a consensus (among the comments) that if even if Bernier stands on his head and does the best Ken Dryden impression since, well, Ken Dryden, Bernier will be on the next plane back to Manchester.

[click here for the story of how Dryden, AHL goalie, was called up at the end of the 1971 season to give starting goalie Rogie Vachon a couple of games rest before the playoffs]

Three or four months ago, I argued in favor of bringing up Bernier for 10-15 games, even if it meant zipping him back and forth to/from Manchester a dozen times. [THIS POST CONTINUES AFTER THE JUMP, LINK AFTER THE POLL; POLL IS RUDE AND PUSHY.]

My reasoning was that Ersberg was not inspiring confidence and it would be foolhardy to ride Quick for 75 games and expect him not to burn out, or worse, get inj****d. It also seemed unwise to put the team in a position where a post-deadline inj**y to Quick would leave us at the 11th hour with a choice between a cold Ersberg and an untested Bernier, neither of which were good options. But of course it has always been Lombardi's plan to have Bernier play the entire season in Manchester, for all the reasons that have been covered a million times (experience, maturity, learning to win). And so Bernier did not get his 15 games.

(There is also a faction of Kings fans who believe that one of Bernier or Quick is likely to be traded this summer, but I think that's crazy talk. Lombardi lived this plot already in San Jose. He's going to continue to water and grow his assets at the NHL level, because that's how to maximize their value. Quick and Bernier will be 1a/1b in LA next season, Jeff Zatkoff will be the starter in Manchester, Martin Jones will be the back-up, and Ersberg will be waived or traded. Otherwise, to trade Bernier before he ever plays meaningful games in the NHL, or to trade Quick before Bernier has been tested in NHL games, that would be borderline criminal. Milburyesque.)

Given today's news, I tried to be a responsible grown-up and decide if it really was the prudent, fair, responsible thing to do to start Ersberg. After all, he is cold, and he does need to shake the rust off. I mean, what happens if Quick gets inj***d in the playoffs and Ersberg got the call? 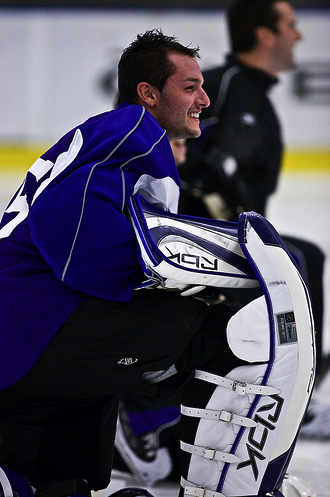 But then I realized, if Quick gets inj***d, Ersberg will finish that game, but then Bernier comes up and we have the same exact choice we're facing now. And I really don't think, in that scenario, there's even much of a choice. Is Bernier going to sit on the bench because Erik Ersberg has played 50 NHL games?

Bernier starts in the playoffs.

Do you think Lombardi (yeah, yeah, I know it's Murray's decision...) would be willing to lose with Ersberg in net with the future of the franchise sitting on the bench the whole time? I don't, either. And if Lombardi has thought this through (the odds of him not having played out this decision tree about a million times are, frankly, zero), he also knows that Bernier needs to start tomorrow's game, to give him a chance to shake off the jitters, so he doesn't have to do it in April or May). There's no point in shaking off Ersberg's rust if Ersberg is never going to play.

Now. Say Bernier plays tomorrow and is average, sucks, or is otherwise not spectacular. That would of course be disappointing, and I wouldn't be surprised if he was sent down as soon as Quick returned. But starting him still would have been the right call, because what we're doing is preparing for the unexpected. And the unexpected scenario we'd like to avoid is Bernier called into action in the playoffs without having played an NHL game in almost three years.

However: what if, tomorrow, Bernier stands on his head? I've heard people say he gets sent down no matter what. Sounds mature and responsible to say that. I certainly feel immature thinking otherwise. But...why is that again? Why not give him another start? Give Quick some more rest -- let him get in some practice time with Ranford, one of those little checks of the fundamentals, which he's had no time to do lately -- let Bernier play until he's not Jesus walking on water. If Bernier drops the ball, fine. But if he delivers a string of shut-outs (etc.), I think Lombardi would be crazy to send him down.