A Study of Short Term Memory Impairment in Ref Population

Share All sharing options for: A Study of Short Term Memory Impairment in Ref Population

Jim Fox and Nick Nickson, calling the game on FSWHD, indicated that the ref behind the net was not the one who saw the interference by Ryan Smyth, but it was pretty clear on the replay that the ref waived it off and then pointed at Smyth, so I don't think it was a call that was fabricated after the fact. Also, not to contradict Fox, who is wise, but the puck was pretty clearly over the line.

No problem, I say. Smyth really did bump Pekka Rinne, so I don't mind the call. AS LONG AS A FEW SECONDS LATER THE SAME EXACT PLAY DOESN'T OCCUR AT THE OTHER END OF THE ICE AND THE VERY SAME REF MAKES THE OPPOSITE CALL. Worse: Smyth barely touched Rinne, while Jonathan Quick was dragged away from a LOOSE PUCK IN THE CREASE. It didn't happen quickly, and it wasn't hidden from anyone's view. In real time it almost felt like the whole thing played out in slow-motion. The refs? Didn't see it.

So here's some common sense. If you're going to wave off a goal as a result of a minute detail observed by you through the net and the goalie while you're supposed to be watching the puck, then you have just lowered the standard in terms of what can be called and what can't be. Knowing that you just waived off the go-ahead goal, there would have to be something mentally wrong with you not to be, from that point forward, hyper-vigilant in keeping an eye out for similar infractions. A normal person would attempt to be impartial, and consistent, by committing to memory the exact circumstances of call "a" so that he can applying the same ruling to call "b", especially where b = a times infinity. But no. Instead you're Mr Short Term Memory.

(as an aside, Quick made a comment to Rich Hammond, "I thought that’s why they had video replay." Sadly, no. Per Rule 69.1, goaltender interference is not reviewable. You probably assumed it was, because that would make sense. But apparently the boundary in the sense/nonsense dichotomy is somewhere to the right of "Intent to Blow.")

I have another topic and nowhere to put it. It doesn't deserve its own post, so I'm putting it here (follow link after poll or click on this):

In the wake of the last couple Jonathan Bernier posts, I've been trying to find stats on rebounds, rebound shots and rebound goals. I haven't found much, but I did find a post from Brodeur is a Fraud which noted that the average number of rebound shots is within the range of 3.6% to 6.1% of total shots against. Shots-per-game (by team) average between 27 and 34. Assuming a team allows the most rebounds out of the highest shot total, you get a ceiling of 2 rebound shots per game, and a floor of 0.97. Shooting percentage on rebounds ranges from 24-28%, which means that the range of rebound GOALS per game is roughly 0.24-0.69. Which ain't much.

So I made a vow to start counting rebounds, rebound shots and rebound goals starting today. 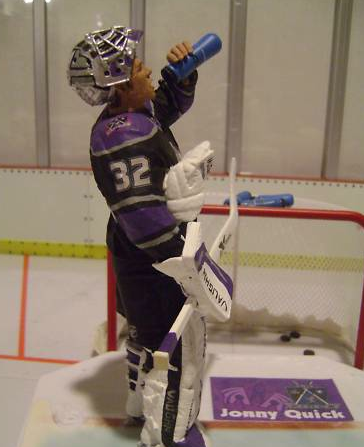 I kind of forgot to, about half the time. In the time that I remembered to do it, I counted 8 rebounds given up by Quick, two of which did not result in a shot, two of which resulted in a shot wide (one of which was fluttering onto the top of the net), and four of which resulted in rebound shots on goal. Two of those resulted in goals. Now, as already noted, the second of those rebound goals was total B.S. and should have been waived off. Nevertheless, the four rebounds that resulted in shots yielded two goals against. And two of the shots wide were very, very close.

Now this is one game, so it's not any kind of fair sample size. But I would just point out, that's two or three times the league average in rebound shots, and between three and eight times as many rebound goals.

I am not down on Quick. But I do think it was unwise to start him today, barely 48 hours after his wife completed a 36 hour labor. Basically, the guy pulled an all-nighter two nights in a row. Barry Trotz boiled it down pretty well, talking to Rich Hammond: "I thought Jonathan Quick was, obviously, maybe a little rusty. He’s had a lot of great things happen to him in the last couple days so he’s probably been on an emotional roller coaster, and he was just having trouble hanging onto the puck a little bit."

I would have given him another game off to get his wits about him. Which is why I said Bernier should have started today. Could have been the same outcome; Nashville tends to own the Kings. But there's no denying Quick was out of sorts. Who wouldn't be?

[by the way, you have to buy one of these]