This game is a rainbow of crap; not watching any more; so here are some stats and a poll

Share All sharing options for: This game is a rainbow of crap; not watching any more; so here are some stats and a poll

[SPOILER ALERT: It didn't occur to me that if you arrived at this post from the SBN home page or one of the other team pages or in fact anywhere but from our home page, you would not see the poll before you saw the answer to the question and ruined the surprise. If you want to preserve the suspense, quickly click on the JFTC logo in the upper left and proceed from there. Otherwise, grrr/sorry/(gnashing teeth), it's been that kind of day.]

Everything I'm about to say does not include tonight's idiocy.

The Kings have a WIN% of .625. Here are the names of five players. Scott Parse, Oscar Moller, Davis Drewiske, Randy Jones, Teddy Purcell and Justin Williams. Okay, six players. You tell me which of them has the best WIN% (i.e. when they play the team wins). I picked these six guys because there's a more-or-less balanced split of games with them and without them. 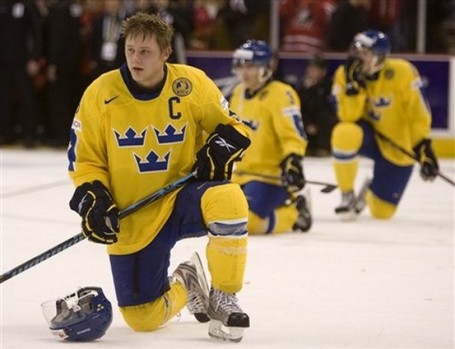 Why, it's Teddy Purcell -- The Kings are .646 with him in the line-up, and .592 without him. I guess they're going to be without him for awhile. Who comes in third?

Everyone's favorite whipping boy, Randy Jones. Yes, the Kings are .628 with him, .621 without him. Not a big spread there. Very similar to the next guy:

Scott Parse. The Kings are .627 with Parse playing, .617 without him. Both Parse and Jones are on the positive side, but close to a wash. May not seem like much of a difference, but it seems so much better when you consider:

Justin Williams. The Kings are .586 with him in the line-up, and .667 with him out. Why? I have no idea. I like Williams and I feel like the team is better when he's playing. Except the numbers don't bear that out. Maybe it's a coincidence.I hope so.

I don't really have a point. I'm just grumpy. Is the game over yet?