That's right. My personal favorite over-ager, Jacob Muzzin got some pretty significant recognition from the coaches of his OHL opponents.

Apparently, the Soo Greyhounds aren't the only ones who've grown to appreciate the multiple talents of overage defenceman Jake Muzzin. The 21-year-old native of Woodstock, Ont., made a major splash in late March, finishing first, or tied for first, in three categories in the Ontario Hockey League's annual Western Conference Coaches Poll. Muzzin was chosen the player with the hardest shot, the best defensive defenceman and he tied London's Leigh Salters as the conference's best body-checker. The fourth-year player also placed second behind Windsor's Ryan Ellis in the best offensive defenceman category.

Muzzin's showing was the best of any conference player.

Not to belabor the obvious, but Seguin and Hall are about to be the top two picks in this June's draft. Add Muzzin to the list of why I love Dean Lombardi.

However, I am getting a little tired of the cut-and-paste head to some other Kings player's body. Muzzin and Jeff Halpern are time-sharing this one. Note wrinkles on shoulders. 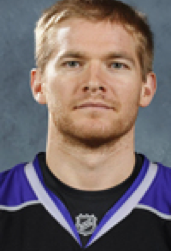