Share All sharing options for: Revisiting (my) Pre-Season Targets

Last summer, I decided that the Kings needed to score 245 goals in order to make the playoffs:

Note to Self: predictions for 09/10
If the Kings manage 245 goals for and 230 goals against, they will make the playoffs. Last year: 207/234. So basically, play the system and add 38 more goals. How hard is that? Wait...how hard is that? In the entire history of the Kings, they have managed to hit both those marks in the same season (at least 245 goals for and no more than 230 goals against) twice. In 1974-75, which was their 105 point season. And in 2000-2001, the year in which they lost in the 2nd round to Colorado in 7 games after beating Detroit. In terms of that big a jump in goal production from one year to the next... They did it the first year after the lockout, but it's hard to know what that means. They did it in '99-00, which was the year they added Palffy and Smoke. They added about 50 goals in '88 somehow.

Last summer, I made a little budget, assigning goal totals to each Kings scorer. The purpose, originally, was to show people (there were a lot of nay-sayers) that it was in fact feasible for the Kings to hit 250 with the roster they had. (I rounded up from 245, don't know why). Here's what I said needed to happen:

(First column is goals-scored the previous season. Second column is my target number for that player.) 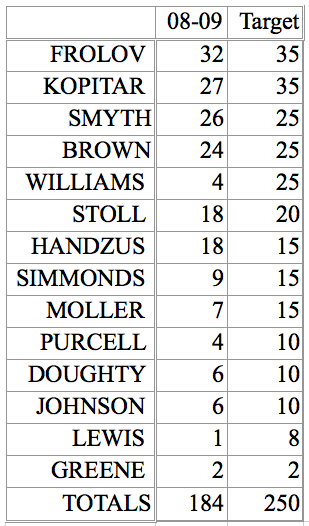 I just learned something. Look, the total for actual goals-scored is 231. But the total on ESPN's site is 241. On a hunch, I counted the shoot-out wins. Sure enough, there were ten. So a shoot-out win counts as a team "goal for" despite counting as a goal for nobody in particular? Weird and stupid.

Here's the same chart, removing the players who weren't on my radar back in July. It gives you (or me, anyway) a better picture of what happened re my expectations of the team as it stood before the season started. 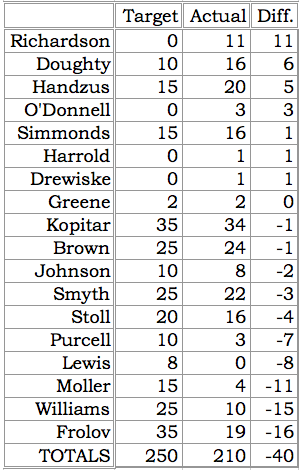 I over-estimated that roster by forty goals. That seems like a lot. How did they make up the difference? Here are the off-the-radar guys: 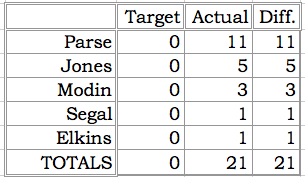 That makes a certain amount of sense. I expected 23 goals from Moller and Lewis, but they barely played.  The 16 goals from the forwards on the above chart makes up most of that. Now let's look at top-six forwards vs. bottom six. Here's just the top-six forwards: 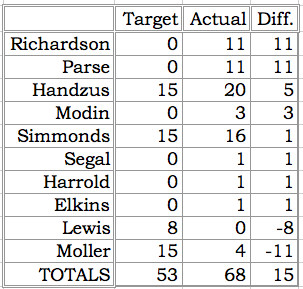 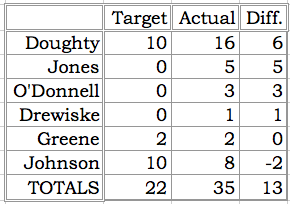 What does this tell me? Mainly that I over-estimated what the top two lines would do, but that was almost entirely corrected by the bottom six and defense output. And most of the top-six short-fall was Williams (who was hurt, but that's no consolation) and Frolov, who -- I don't know. Something happened there. Don't know what.

I targeted a goal differential of +15. As it turned out, five of the eight playoff teams in the West were +22 or better. Detroit (an anomaly due to injuries) finished +13. Avs, +11. Nashville, even. All the non-playoff teams had negative differentials, except STL, who was +2. Since Colorado, Nashville and Detroit cut it kind of close, maybe my target should have been around +20. Anyway, the Kings beat that.

Now I just have to figure out what to do about this weird shoot-out team goal-for that's credited to nobody. Do they get a goal-against, too? They must. But the goalie doesn't get a goal against. It doesn't affect their GAA or SV%. Yeah, that shoot-out sure is great...