It was clear last several months ago that the Blackhawks couldn't care less about what was going to happen the summer of 2010. My last thoughts went something like this:

Hawks are ready for 2010-11, due to their sublime scheme of evil genius

No one is ever going to take on that Campbell contract. I guess one plan would be to hope you win the cup and then trade Huet at peak value.

That could happen, and then you'd be done. Failing that (and I think trading Huet is extremely unlikely), Chicago is going to have to lose two of Bolland, Versteeg, Byfuglien or Seabrook, or else lose just one of them and then waive Campbell and hope someone picks him up on re-entry at half-price.

So, to sum up, I would probably demote Sopel, trade Kopecky and two of Bolland, Baker, Versteeg, Byfuglien or Seabrook. And replace them with NINE MINIMUM WAGE EMPLOYEES.

Yeah, right. Good management, Chicago. You're completely screwed. And after you lose in the Cup finals to Pittsburgh, and HOSSA GOES INTO THE LOONEY BIN, what then? (Wait. Is that the plan? Hossa goes away on "medical leave" and you get his cap hit off the books? That's possibly genius. Okay, I take it all back. I hope that happens.)

In the last six months, the numbers have changed a bit. Hey, maybe things are looking better for the Hawks. With that thought in mind, I went to cap-geek to crunch numbers. I assumed that the Hawks win the cup and some players are entitled to a raise. Primarily, Antti Niemi. I then filled out the roster with minimum wage employees. Here's what I came up with: 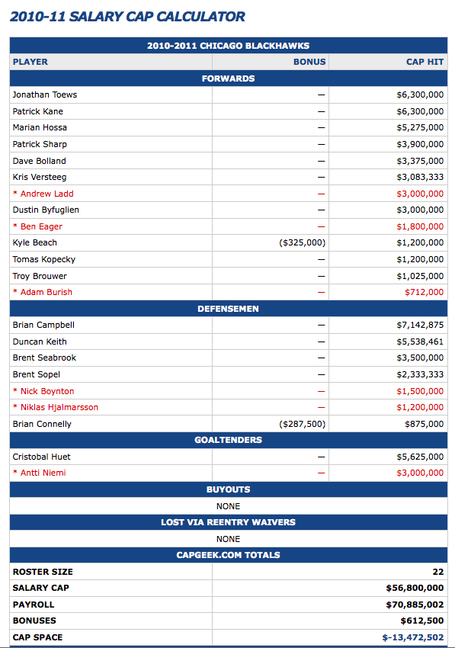 Well, that's not so good. Given the raises they're going to have to give to Andrew Ladd, Ben Eager and Neimi, the Blackhawks find themselves $13.4MM over the cap.

They simply have to resolve the Cristobal Huet situation. The only way out I see (other than dumping him in the minors), is a buy-out. Buying out Huet reduces his cap hit to $1.875MM for four years. That's a savings of $3.75MM (cap hit).

(However, please note that the Campbell buy-out cap hit will be on the books until, wait for it...

That probably seems farther away than it is.

But now we're within $5.3MM of the cap ceiling.

Okay, $4.8MM to go. Buying-out Brent Sopel would save a million, as would waiving him and hoping someone picks him up on re-entry. Okay, buy him out. That's $1.34MM of cap savings, leaving us with $4MM to go.

But remember we have to replace the bodies we get rid of, and we've dumped three bodies so far. Two more, at $3MM each would clear $6MM of cap space, and we would be $2MM under. But we'd have five players to sign. Okay, we'll worry about that in a minute. Right now, we have to figure out:

Which two of Patrick Sharp, Dave Bolland, Kris Versteeg, Andrew Ladd, Dustin Byfuglien or Brent Seabrook are we going to trade away for picks and prospects (or minimum wagers to fill the empty spots)? Doesn't matter to me, so I'll randomly select Ladd and Bolland.

Okay, I'll play devil's advocate and just trade Bolland. Keep Ladd. But we'll really have to squeeze in other places...

Last but not least, forget Nick Boynton and instead throw a prospect in there. Now, having done those several moves, let's see what we've got. Back to cap-geek:

[Okay, running the capgeek figures, filling in the roster with the cheapest prospect defensemen available, it turns out we're still $1.3MM over -- using this year's cap ceiling. Another move needs to be made. Okay, I sent Kyle Beach away and promoted a cheap forward prospect. Still over. Okay, I got rid of the prospect d and put even cheaper UFA d in their place. And I'm still half a million over! Okay, reduce to six d. THAT'S IT! Got it.

So, without further ado, ladies and gentlemen, your 2010-2011 Stanley Cup Champion Chicago Blackhawks! 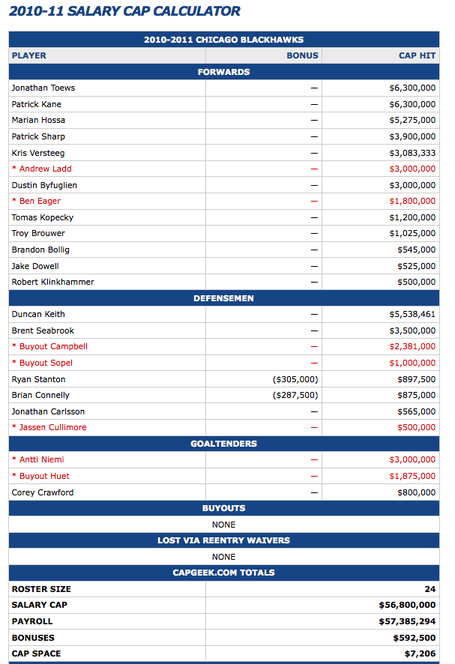 Ignore the part where it says "no buy-outs," as I figured them into the other sections. Also the roster size includes the three buyouts, so in fact it's 21, not 24. Thirteen forwards, six defensemen and two goalies.

Gone are Bolland, Boynton, Huet, Campbell, Sopel, John Madden, Adam Burish and that's all, just those seven. Oh, and there's no room to promote the blue-chip prospects (i.e. Kyle Beach). You've used up every last penny of your bonus cushion, so you'd better pray those bonuses don't have to be paid (or you get penalized by having the overage subtracted from the following year's cap ceiling). And you only have six defensemen, so I hope no-one gets injured. Although, on the bright-side: