No Cap-22 for Sharks

Share All sharing options for: No Cap-22 for Sharks

I do enjoy it when big lurching behemoths spend themselves into a Cap-22. However, looking at San Jose's cap figures for next year, I don't see any kind of crisis. Unlike Chicago, who has to choose among several variations of hideous roster moves, the Sharks basically have the option of staying pat, provided that they manage to do the following things:

I cap-geeked these moves and plugged in any old names for the $500-$900K contracts. You can sub in or out anyone you please. And it looks something like this: 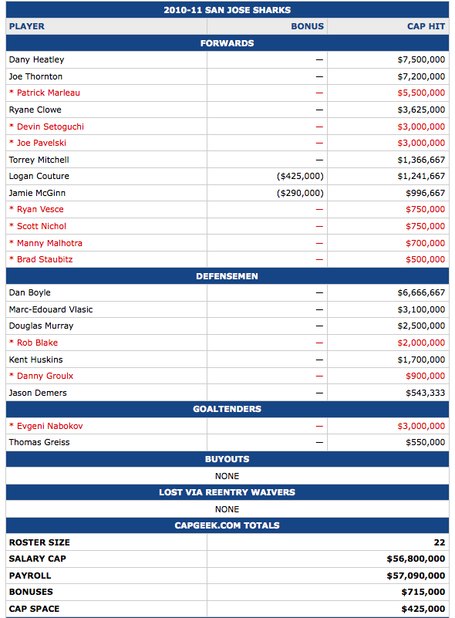 The Sharks end up with essentially exactly the same team as 2009-2010. With under a million in cap space. That's workable. Now, there's a whole other conversation to have about what they should do, whether they should stick with these guys, who, as Kukla's Korner said this weekend, "have shown that they know how to almost win," or embrace a vision of the future that involves losing Marleau, upgrading (or downsizing the salary of) their goaltending, trading Joe Thornton, trading Dany Heatley (whose stock has to be up from last summer; they could flip him and get themselves a nice return; me, I would keep him), or any other rebuilding model you care to consider.

Bottom line: I'm sad to report the cap will not force them to do something painful and stupid. But that doesn't stop them from being stupid all on their own. One can dream.