Brought To You From The Floor of STAPLES

Share All sharing options for: Brought To You From The Floor of STAPLES

Here we are at the 2010 NHL Entry Draft. STAPLES Center has been slowly filling up for the past two hours and I'm in the media pit witnessing first-hand the wheeling and dealing of the day.

This will be a sort of open forum for those who can tear themselves away from the TV for a second or two, which I will be updating every so often.

Update [3:50pm]: Resounding BOOOOs from the rafters on hearing the words "Anaheim Ducks."

Update [3:59pm]: Luc Robitaille and Dustin Brown at the podium to welcome the players to LA.

Update [4:06pm]: How's the coverage on TV? We're watching packages on the big screen in the arena. LOUD "Let's go Oilers" chant going on near the stage.

Update [4:15pm]: Commissioner Gary Bettman stated that this is the first NHL Entry Draft in the state of California. Thank god for Los Angeles getting first in something.

Update [4:46pm]: Want to know what it's like on the floor of STAPLES? Not too much of a difference than when you're at home. Kinda true, kinda not.

Update [5:09pm]: Kings table on the floor looks like it's just hanging out.

Update [5:11pm]: Scratch that. Dean Lombardi is on the phone. Could be something, could be nothing. 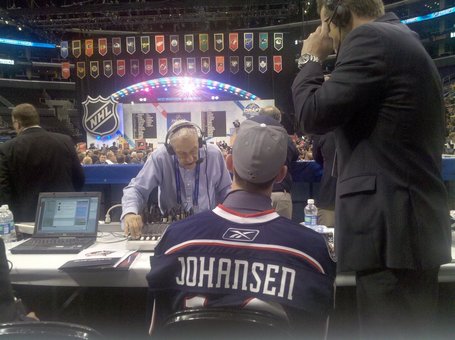 Update [6:11pm]: Kings select Derek Forbort. With video! Taken with my shakey hand; hopefully the audio works out for you guys. Best I could do while in a cramped position.