Can YOU Afford Kovalchuk?

Share All sharing options for: Can YOU Afford Kovalchuk?

Four days till Thursday. Lots of time for everyone to twist themselves into pretzels. I keep hearing how much cap space the Kings have and how they/we are the "front-runners" to land Kovalchuk. Frankly, I'm not sure what front-runner means in this context, other than I guess they have to say there is one.

I will take a different approach. Take a team's current cap hit, add in a very low estimate for any RFAs the team is generally thought to be re-signing (in the Kings' case, it's Richardson and Lewis), and then add in $8.5MM cap hit for Ilya Kovalchuk, and see where that gets you, cap-wise.

The teams in red are the ones who simply can't sign Kovalchuk because doing so puts them seriously over the cap. (My definition of "seriously over the cap" in this context is, "team has several players yet to sign to get to a full roster and zero dollars per player to do it with.")

Teams in orange would be foolish to try to add a Kovalchuk cap-hit to their rosters, but they could sort of almost just barely do it. The orange teams would be putting themselves in the position of having to fill out their roster with several players who make "minimum wage."

Teams in yellow can do it and will still have $1-2MM left over per player they need to sign. Teams in green have more than $2MM per player left to sign (or else would already have a full roster), and so are obviously in the best position of all the teams.

Atlanta is in black, because he's not signing there.

The charts are sorted by draft rank, with the best teams at the top. I did it this way because it is assumed Kovalchuk wants to sign with a "contender." There is a lot of information here, but the most important stuff is in the last four columns (in either chart, but more legible in the second chart). Those show what each team's cap situation would be like post-Kovalchuk (with minimal RFA signings), in terms of cap hit, cap space, players left to sign and cap dollars left for each of those players needing to be signed.

The first chart is exhaustive and you need to click on it to open a bigger, legible version. The second chart is boiled down (same stuff, fewer columns). 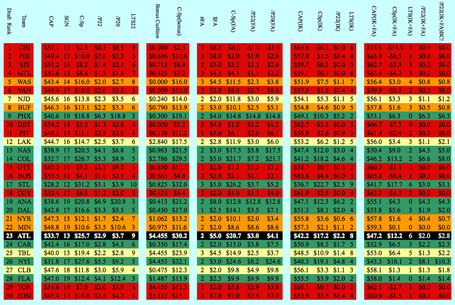 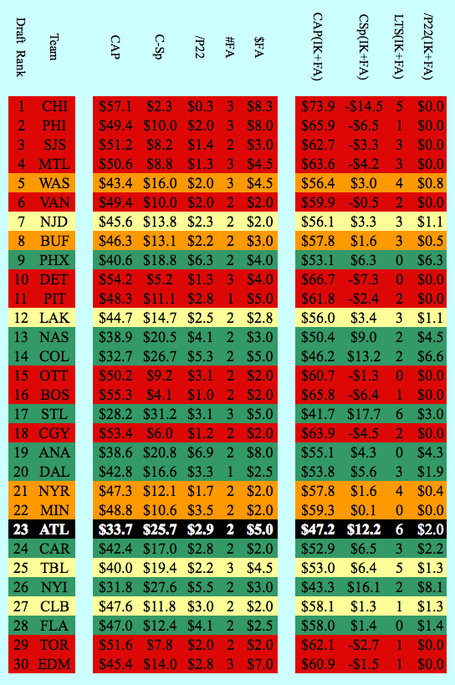 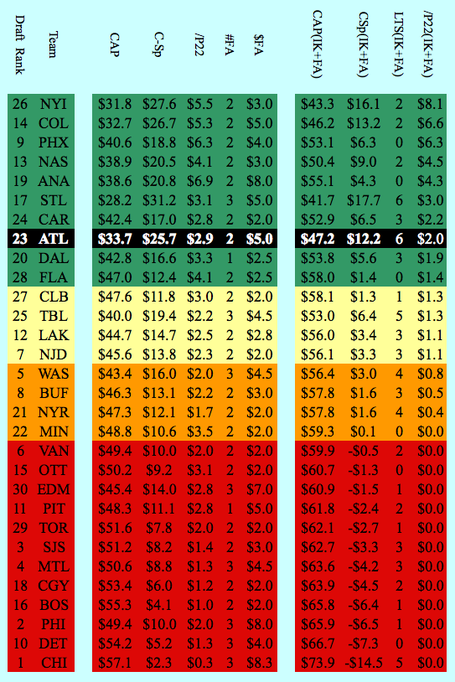