Share All sharing options for: [6/30 UPDATE] Can You Afford Kovalchuk NOW?

Less than 22 hours until you know what. The cap figures have shifted a bit since three days ago, due to buy-outs (Cheechoo, O'Sullivan), waivers (Moreau), trades (Ellis) and signings (Leighton). I also chose to sort one of the charts by "cap space per player remaining to be signed assuming the team is crazy enough to use its bonus cushion" (the last column). This levels the playing field a bit by recognizing that, at this time of year, GMs sometimes go insane.

What I have done is, take a team's current cap hit, add in a very low estimate for any RFAs the team is generally thought to be re-signing, and then add in $8.5MM cap hit for Ilya Kovalchuk, and see where that gets you, cap-wise.

The teams in red are the ones who can't sign Kovalchuk without making substantial moves first.

The teams in orange are the ones who shouldn't sign Kovalchuk but could almost do it, if willing to flirt with cap hell, and willing to fill out their roster with minimum wage employees.

Teams in yellow can do it and will still have $1-2MM left over per player they need to sign.

Teams in green have more than $2MM per player left to sign (or else would already have a full roster), and so are obviously in the best position of all the teams.

Atlanta is in black, because he's not signing there.

The first chart is sorted by draft rank, with the best teams at the top. I did it this way because it is assumed Kovalchuk wants to sign with a "contender." There is a lot of information here, but the most important stuff is in the last four columns. Those show what each team's cap situation would be like post-Kovalchuk (with minimal RFA signings), in terms of cap hit, cap space, players left to sign and cap dollars left for each of those players needing to be signed.

Click on each chart to see a bigger, higher-resolution version that won't hurt your eyes. 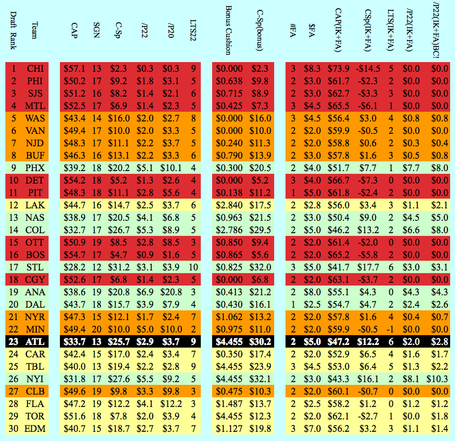 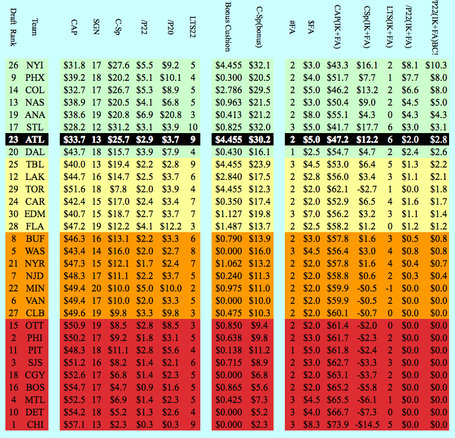 Lastly, here's the most-detailed version of the chart, with all the columns. Again, click through for the bigger better version. 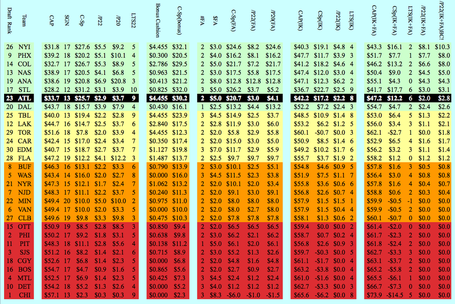