The following weirdness appeared on Twitter a few minutes ago. It appears to be a twit-spat between Matthew Barry of HockeyBuzz and Ryan Smyth of the Los Angeles Kings. Except I think the Smyth is fake.

So, Smyth or someone pretending to be Smyth makes a somewhat leading comment about today being a "big day for Kings fans." Various twitterers notice and remark that Smyth hasn't tweeted in over a year. I checked this out. It's true that the account has mundane tweets from this time last year, then nothing, just like the guy says. The tweets are not very interesting, physicals, meeting up with brownie or someone, more or less believable to be coming from the actual guy (not to say it's not fake, just that it's a decent fake). Somebody apparently says something to "Smyth" about Eklund saying the IK deal is off. "Smyth" responds that Eklund is a joke. Matt Barry calls "Smyth" an idiot. At which point someone tweets that "Smyth's" tweets have been deleted. The account's referred website is letsgokings.com, which I don't think would be Smyth's go-to site, but maybe it is; maybe he set it up and didn't know about Rich then -- I don't think Rich had switched over to the official Kings site a year ago, so that could make sense, actually. The only thing that puzzles me is that if this is a fake account, it's one that someone set up over a year ago and used somewhat aimlessly. It's not like the account just appeared today.

The last part of the tweeting, I screen-captured. Here it is: 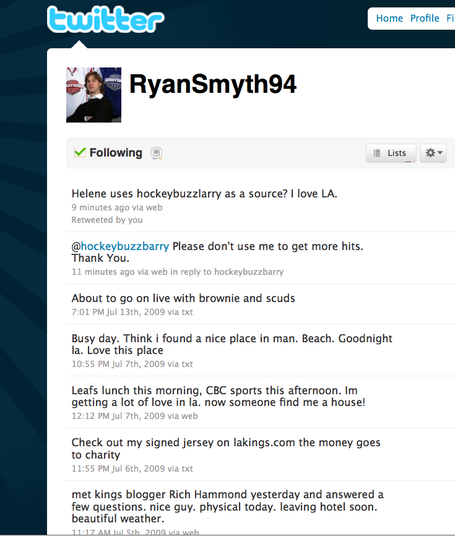 As you can see, the tweets I grabbed earlier have been deleted completely. But "Smyth" is back, telling Matt Barry off. And here's the latest one: 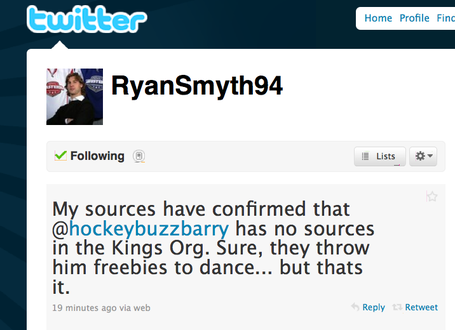 As much as it would be great for Ryan Smyth to appear out of the blue to set all our little minds at ease, I have to say that doesn't sound like Ryan Smyth. And it's a little too convenient.