Before you read this post, I want you to play the following thought experiment.

We've all heard the various hypothetical/rumored long-term deals bandied about for Ilya Kovalchuk, everything from a (now considered shortish) seven years to an unimaginable 15 years. It's generally assumed that any deal cap-friendly enough for the Kings (or Devils) would have to be in the 10 year (plus) range, front-loaded, to bring the cap hit down. Which means it's likely that whoever signs Kovalchuk will be getting him for 10 years or more. Which is -- um -- a long time.

Here's the thought experiment: You sign IK for 10 years at a $7MM cap hit. How many 50 goal, 40 goal and 30 goal seasons do you need to get out of him to make the deal worth it? Assume he's going to play all ten years. How many times does he have to hit each milestone?

Take your time. Get the number in your head and hold it there and don't change it. Ready?

Okay. Now, here are some charts. Actually, it's one chart, rendered in two different formats. The first is a series of screen captures (which you have to click on to get the high-res version), because I wanted you to see the color graphics which I couldn't embed in the second chart. The second chart is the same data as the first chart(s), but it's sortable.

What's in the charts?

The charts show every player in the history of the NHL to have scored 50 goals in a season at least once. It shows the player's output (goals only) for each season of his career, each season indicated by the age of the player in that season. So you can, for example, look down the first column to see who scored how many goals at age 18, etc.. The second row calculates the average number of goals for all the players in this group who were active at that particular age (e.g. at age 25, the average output -- for this elite group of once-or-future 50 goal scorers -- is 37 goals). The color charts use the following exciting color code:

The black vertical line divides the chart between ages 26 and 27, because Kovalchuk is 27 and what we're interested in is, how well players of his caliber (defined broadly to include everyone who has ever scored 50 goals in a season) do after this age.

The red horizontal line is my subjective line in the sand, above which the careers post-age-26 are acceptable for a long term $7MM deal, below which, less than acceptable. Your results may vary. [2011 UPDATE: I omitted this line; it was previously in the neighborhood of Bobby Hull and Teemu Selanne.]

The first thing I invite you to do is to shrink down your page as much as possible, so you can see all the color charts on one screen. Don't worry about reading the data. Just look at the pattern of the colors, in relation to the vertical black line and the horizontal red one. Those of us feeling especially optimistic about signing IK at $10MM cap hit for 10 years, or whatever, ought to be somewhat alarmed to see that there really isn't that much red or orange to the right of the black line. 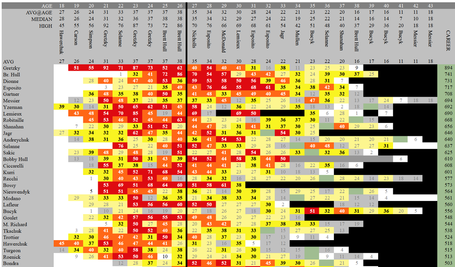 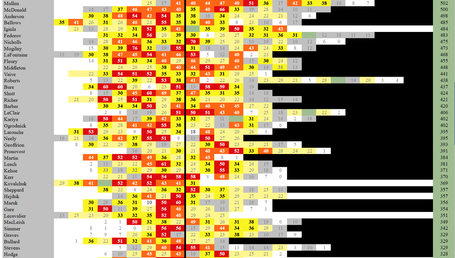 Let me make some other observations:

I'm not arguing against signing Kovalchuk. I like Kovalchuk. But when people decry the lack of "balls" of Kings management, and wonder why they don't just "man up" and sign the guy at $100MM/10 years, this is why. He won't be worth it in ten years. Or even five. But he will be more than worth it at the right price, with a contract that is not only affordable, but is a valuable tradable asset five years from now. Instead of an albatross.