Here's another way to look at the data from this weekend's post on the careers of 50-goal scorers (from now on, "50GS"). I took those numbers and focused entirely on two things: (1) the most goals anyone has ever scored at a given age, and (2) the mean within the 50GS group, at a given age.

Then I graphed the mean and the peak goal total for each year, plotting them against Kovalchuk's goal totals so far. I then made a very, very (very) rough estimation of a projection for Kovalchuk. I calculated the ratio of IK's totals to the average and to the peak in each year, and projected those numbers out to age 44. The numbers to date show Kovalchuk to be consistently above average among 50GS, but well below the best number for all 50GS at any given age. The projection simply (and somewhat primatively) carries this through. (I could just as easily have taken a sharpie and drawn a line more or less where I thought it would go, given the other lines. But I used the numbers instead. Scientific, I know!)

The dip to zero on the Kokvalchuk (green) line reflects the lock-out season, so ignore it. The purple line is the projection of Kovalchuk's goal totals through the next sixteen seasons. Since no 50GS has ever played at age 44, there is no data, so it's not reflected on the graph.

The chart under the graph shows the (past, present or future) 50GS who scored the most goals at any given age, the average for each age in the population of 50GS, and Kovalchuk's numbers. 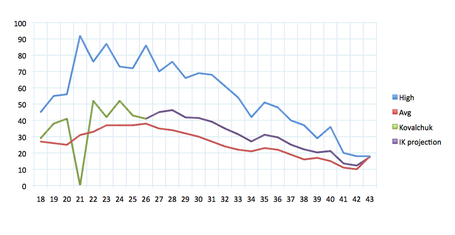 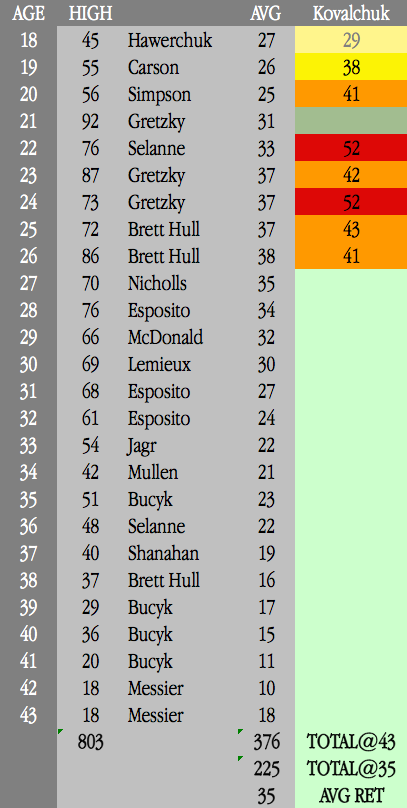 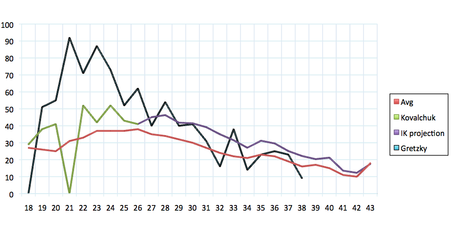