Share All sharing options for: Where's the Kovalchuk "back-up" deal?

A week ago, before the Bloch ruling came down, the more or less conventional wisdom was that the Devils and Kovalchuk would have a back-up deal in place and ready to go in case the hearing didn't go their way. A week later, that deal hasn't happened. Why not?

I hesitate to say it, but there is simply no reason for that deal not to have been signed instantaneously if in fact the two sides were in agreement on a deal they think Bettman would approve. (Okay, it's possible everyone is in a holding pattern waiting for clarificaion on possible penalties, but the fact that none have been announced suggests that ship has sailed and penalties are no longer an issue.) Lamoriello and Grossman are allowed to pre-approve any deal with the league (i.e. ask Bettman if he thinks this deal will get approved by Bettman, and he should know). So what could possibly be holding this deal up?

I'm going to make some assumptions. First, I think Bettman's range of tolerance is somewhere in the 40-42 range. That's a big range though, given how much one year can mean in terms of raising or lowering the cap hit. Second, I think the Devils may be willing to go as high as $7MM, but they have a line they won't cross somewhere before $8MM, and maybe below $7.5MM.

I have no idea, though, what Kovalchuk is willing to compromise. He might well be sticking with his original demand. After all, if he had been willing to budge from it a month ago he would have signed with the Devils or Kings soon after 7/1 and we wouldn't even be having this conversation. So I think there's at least a decent chance that he is the stick in the mud here.

Let's have some chart fun. Three charts, each one represents a different length of contract Bettman will allow in Kovalchuk's case, 15 year, 14 year or 13 year (taking him to 42, 41 or 40, respectively). The columns in each chart represent the minimum $$ Kovalchuk is willing to accept; the rows in each chart represent the maximum cap hit Lamoriello is willing to accept. No/red means no deal is possible; yes/green means a deal is possible. 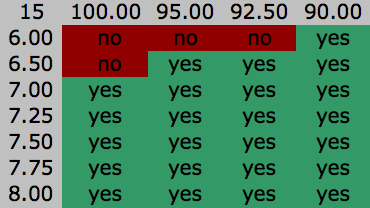 If Bettman is willing to allow a contract that takes Kovalchuk to 42, the chances of a deal are high. Even with no movement from IK, if LL is willing to go up to $7MM cap hit, we have a deal. 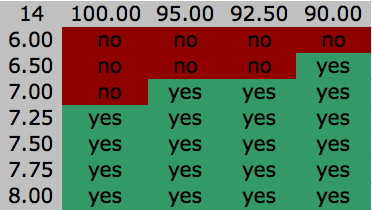 However, if Bettman is less friendly, and will only allow a deal up to age 41, it gets stickier. LL has to come up to $6.5MM at least, and that would require a huge sacrifice on IK's part. With no movement from IK, LL has to go up to $7.25MM, and that's right around where I think his limit is. So, with a 14 year term limit, the likelihood of a deal are not good (but not yet horrible, see below), unless Kovalchuk is willing to compromise. Which he hasn't been willing to do, to date. 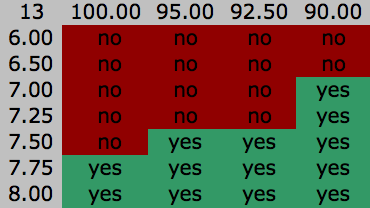 If Bettman won't allow anythiing that takes Kovalchuk over 40 (i.e. 13 year term), Kovalchuk is all but required to take less to get a deal done. Even IK taking $90MM total means LL has to be willing to go up to $7MM cap hit, which is by no means something we can count on. This scenario requires real compromise on the part of both IK and LL. Kovalchuk has to come down at least to $95MM, and Lamoriello has to come up to at least $7MM cap hit. Less sacrifice by one means prohibitively more sacrifice by the other. My guess is that, if Bettman won't allow above 13 years, this deal is unlikely to happen.