According to infallible Twitter, the next chapter in the serial blockbuster known as Kovalchuk Month begins tomorrow, with day one of the hearing. There has obviously been a lot of chatter in the Kovalchukosphere about the NHLPA's supposedly slam dunk case, Bettman's vendetta against the Devils, the league not having a leg to stand on, the groundwork being laid for CONSPIRACY if the league should prevail, and even Brian Burke conceding, essentially, that these kinds of deals are bogus and bad for the league but basically allowed by the CBA.

I'm not so sure they are allowed, as I said in a previous post.

[Burke] assumes that the only way to prove circumvention is to demonstrate that this one guy (Kovalchuk) will retire before he gets to the end of his contract. Obviously, one can't prove that Kovalchuk will not play till he's 44 anymore than one can prove Kovalchuk is not immortal. Yet the argument, "we just don't know if he's immortal, we will have to wait and see what happens," as the basis of an employment contract that extends to the end of time, is incontrovertibly stupid. And we wouldn't have to wait till the end of time (or his death) to prove it either.

I've laid out my argument in bits and pieces over several posts, but to celebrate Arbitration Eve, I decided to boil it all down to one short post. I failed to make it short. I was going to chop it up into several postlets, but with the actual hearing tomorrow, that ship has sailed, too.

As I have said many times, I have no idea who will prevail in this hearing. It's a coin toss. If I had to guess, I would give the slightest edge to the league. My point all along has always been, no matter the outcome, I believe the league has a case. Who knows if the league would even agree with me that this is the case they should make. For all I know it would be one of those "stay off my side" situations.

The Implicit Limit on Term

Where is the Line?

I have a feeling the meaning of these two words is going to be debated this week. So I cut/paste from Webster's.

reason (n) 1 a : a statement offered in explanation or justification <gave reasons that were quite satisfactory> b : a rational ground or motive <a good reason to act soon> c : a sufficient ground of explanation or of logical defense; especially : something (as a principle or law) that supports a conclusion or explains a fact <the reasons behind her client's action.> 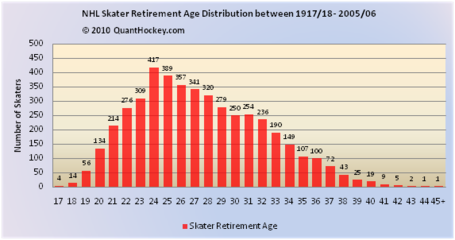 I've graphed the likelihood, based on the quanthockey numbers quoted above, that a player of a certain age will make it through each subsequent year. The chart covers only the years 31 through 42, because these are the years that (mostly) overlap for the contracts of Hossa, Luongo, Zetterberg and Kovalchuk. Hossa and Luongo's contracts started at 30, Zetterberg's at 28, Kovalchuk's at 27. Therefore, the odds of Kovalchuk getting to 31 (year four of his contract) are much lower than the odds of Hossa getting to 31 (year one of his contract).

Two other important points. (1) Zetterberg's line should stop at 40, although I have graphed the probability all the way to 42. (2) Kovalchuk's line should continue off the right margin for two more years, despite being flat-lined at what appears to be zero.

Click on the graph to get a higher-res version that is still crappy to look at. I'm sorry about the quality here; I had a hell of a time getting the graph to format. The key is not legible, really, but the lines are, from top to bottom, Luongo, Hossa, Zetterberg and Kovalchuk. The x axis is years of age, from 31 to 42. The y axis is probability the player plays at age x, expressed in %.

Notice that the Kovalchuk line is consistently at the bottom, across the entire length of the contract. 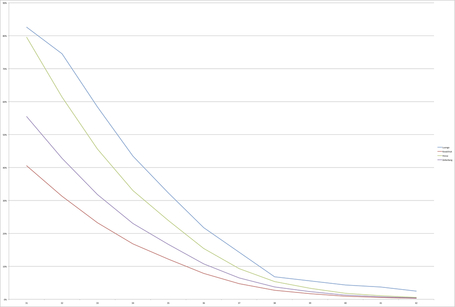 Here is a blow-up of the tail years:

Again, top to bottom, Luongo, Hossa, Zetterberg and Kovalchuk. The purple Zetterberg line should have stopped at 40, but I left it in. Luongo's chances are slightly better than Hossa's over the same period, because goalies on the whole retire later than skaters.

And, as a reminder, the bottom line -- Kovalchuk -- should extend another two years off the right hand margin.